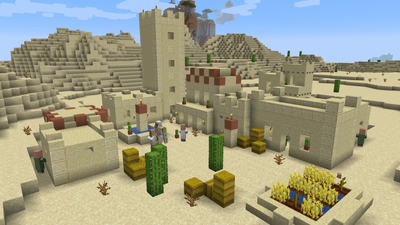 The Villagers are the main civilization found in Minecraft. They are mainly found in isolated villages in biomes with flat terrains. The relationship between villages is unknown, but they are likely in somewhat friendly terms due to neighboring villages capable of easily fusing into one.Their lifestyle is passive, as they spend most of their times on local farms and shops. However, their access to Nether-exclusive goods and their possession of maps leading to faraway places such as the Water Temples seems to hint that some of them may be more adventurous than usual.

Population: Individual villages contain up to 21 villagers, likely an infinite number as a whole

Territory: Individual villages covers a small zone of about a few dozen meters wide, however, villages are found everywhere on the Minecraft world

Technology/Abilities: Possesses several high-level diamond-based weapons and several bows and arrows, capable of using magic to empower their weapons and armors, they have access to several mystical artifacts, such as stones producing constant and endless light, bottles containing magical power and pearls capable of teleporting the user, has compasses capable of pointing to a specific spot at any time, possibly able to travel to the Nether (Not shown directly, but they have a steady supply of material coming from this place)

Attack Potency: Building level for basic weapons (Although they do not use them much by themselves, they should be strong enough to kill basic monsters such as Zombies), Town level for Iron Golems (A single Iron Golem can damage the Wither, and a group of them can even potentially defeat it)

Industrial Capacity: Each individual is capable of creating several pieces of armor over a single day and capable of producing a new Iron Golem in minutes if the last one was destroyed

Military Prowess: Depending its size, a village will always have a certain number of Iron Golems patrolling the village

Weaknesses: The Villagers are extremely passive and pacifist, to the point of never taking up arms by themselves and leaving all the fighting to the Golems. Without golems protecting them, they are extremely vulnerable to zombie attacks and Illager raids.