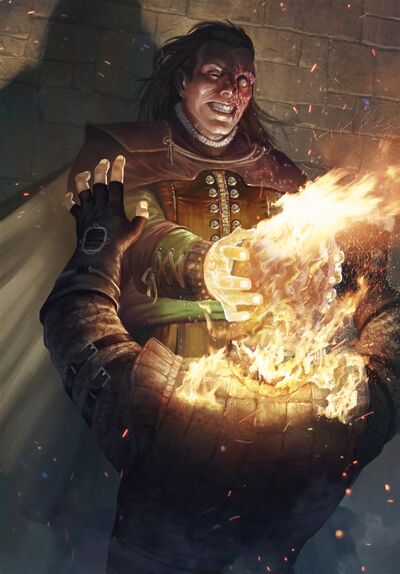 Vilgefortz of Roggeveen was one of the major antagonists of The Witcher book series. He was a mage of extraordinary talent and ambition who orchestrated many of the early major events of the Witcher universe. His ambition would eventually find him searching for Ciri, which would bring him into conflict with Geralt and Yennefer.

Age: Unknown. Is very young by mage standards, and looks around 35 by Geralt's estimation.

Classification: Former druid, Former mercenary and spy, Mage, Hero of the First Northern War, Leader of the Chapter of Sorcerors

Attack Potency: Building level+ physically (Casually defeated Geralt with a mere staff and without the use of magic. Turned Regis into mush), Small City level with magic (Is by and far regarded as the greatest magic user in the Witcher world and thus should be superior to Triss and Yennefer)

Speed: Massively Hypersonic+ (Was able to effortlessly keep pace with Geralt. As he is a mage stronger than Alzur, he should be able to summon his lightning bolt spell, which can literally summon cloud-to-ground lightning)

Durability: Building level+ (Took a hit from Regis. who is comparable to Dettlaff)

Stamina: High (Fought for extended periods of time during the Battle of Sodden Hill and during Geralt, Yennefer and Regis' assault on Stygga Castle)

Range: Extended melee range with his staff, up to several kilometers with magic

Standard Equipment: His staff which he can use to fight both non-magically and magically

Intelligence: Genius (At a very young age, he achieved mastery over druid magic, warfare, leadership, weapon usage, and conventional magic. Became one of if not the youngest leader of the Chapter of Sorcerors, an organization of elite mages. Leading only a handful of somewhat talented mages, he managed to inflict a crushing defeat on the 100,000 strong Nilfgaardian armies of soldiers and mages. Was the also the leader of a covert network of spies and agents working directly under him. It was through his machinations that Emhyr var Emreis managed to rise to the position of the Emperor of Nilfgaard. Was able to design new forms of magic like the one which developed a new eye for the one he had lost. Is by and far regarded as the greatest mage the world has ever seen. Is an exceptional fighter, effortlessly defeating Geralt without magic and using just his staff. With magic, he defeated Geralt, Yennefer and Regis who were working in tandem to defeat him.)

Note: Vilgefortz is scaling to game feats as he was mentioned several times in the games and he has appeared in Gwent, hence it's easier to give proper tiering for him if we treat him as character from the games rather than from books.

Start a Discussion Discussions about Vilgefortz of Roggeveen