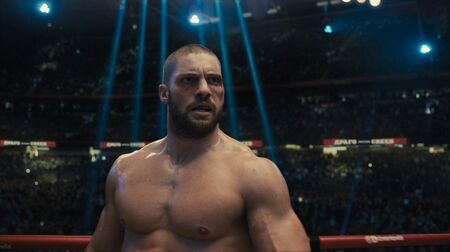 Viktor Drago (born 1990) is an Ukrainian Light Heavyweight boxer and the son of retired Heavyweight boxer Ivan Drago. In order to exact revenge against Rocky Balboa for his defeat in the Soviet Union, Ivan trains Viktor to near-torturous levels to prepare for the upcoming challenge against Adonis Creed.

Attack Potency: Wall level (On par with and has traded blows with his father Ivan, who was still this strong even at the age of 56, was easily pushing him back despite the latter wearing protective gear, and was even giving him severe discomfort despite Viktor holding back somewhat on his punches. Capable of easily breaking bones and rupturing organs with a single punch, as seen when he almost killed Adonis Creed in their first fight. Viktor was also confirmed in a Creed 2 interview with Dolph Lundgren to be comparable to Ivan when the latter was at his peak)

Lifting Strength: At least Peak Human (Pushed back his father multiple times during their training sessions)

Stamina: Superhuman (Withstood a brutal beating from Donnie in their second match)

Weaknesses: Due to his harsh upbringing, his relationship with his father had immensely strained. Prone to violent outbursts, however, if pressured enough, he will start to lose his morale.

Retrieved from "https://vsbattles.fandom.com/wiki/Viktor_Drago?oldid=6265469"
Community content is available under CC-BY-SA unless otherwise noted.