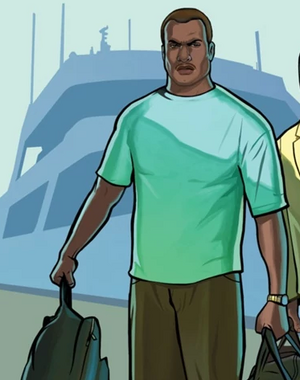 Victor is a former soldier who was kicked out the army because of his superior Jerry Martinez' betrayal. Following his discharge, Vic begins to build a crime empire in Vice City, becoming a powerful figure in the city's underworld.

Tier: 9-B physically, higher with melee weapons and firearms. 9-A with a rocket launcher

Age: 28 during the events of Vice City Stories, 30 at his death

Powers and Abilities: Superhuman Physical Characteristics, Martial Arts, Weapon Mastery (Being a skilled soldier, he is proficient in using a wide variety of firearms), Vehicular Mastery (Skilled at driving cars, motorcycles and boats, as well as piloting helicopters and airplanes), Stealth Mastery, Preparation (Good at planning out ambushes), Explosion Manipulation via grenades, Fire Manipulation via molotovs, can become immune to ordinary fire after completing Level 15 of the Firefighter side-mission

Attack Potency: Wall level (Can trade blows with those who can slightly harm him. He can effortlessly snap people's necks with just grip strength and throw people back a few feet. Can destroy cars after repeatedly hitting them. Can dent metal with his strikes and knock down street lights), higher with melee weapons (His katana can kill people in 1 or 2 slices, and his chainsaw can easily cut through bodies and cars) and with firearms. Small Building level with a rocket launcher (Can take down helicopters with a single shot. Can one shot multiple cars at once and reduce them to charred metal)

Speed: Peak Human (Far faster than anyone in the game. Can easily outrun vehicles moving at moderately-high speeds on his lonesome) with Subsonic+ combat speed and reactions (Consistently reacts to RPG-7 missiles and high-speed vehicles). Subsonic with most vehicles, helicopters, and planes (Biplane and Skimmer). Subsonic+ to Supersonic+ attacking speed with most firearms.

Lifting Strength: At least Class 1 (Can effortlessly snap necks of other people with grip strength alone)

Durability: Small Building level (Can tank a few point-blank rocket launcher shots before dying. Can survive grenades blowing up in his face, as well as shots from the Rhino tank, which can one-shot cars with ease. Can take falls from great heights without any issue), higher with Body Armor (More durable than before)

Stamina: Very high (Can take explosions to the face and go on for hours in a fight if need be), Nigh-Infinite after completing Level 15 of the Paramedic side-mission (Grants him the ability to sprint and swim indefinitely without exhaustion)

Standard Equipment: An arsenal of weapons, though he is limited to one of each type

Intelligence: Above Average (Vic is a master of combat and is the leader of his own criminal empire. He is proficient in laying out plans)

Weaknesses: Has a short temper and is easily provoked when someone acts foolish, otherwise none notable. Has also become significantly fat as of Vice City.

Retrieved from "https://vsbattles.fandom.com/wiki/Victor_Vance?oldid=5723985"
Community content is available under CC-BY-SA unless otherwise noted.