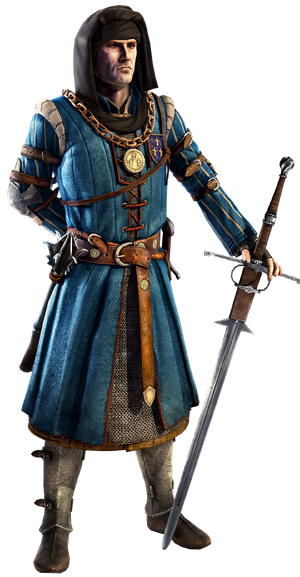 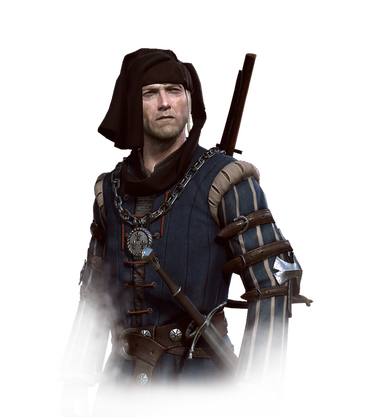 Vernon Roche was the commander of the Blue Stripes, special forces of the Temerian military. Being Temerian he held his king, Foltest, in high regard. He was also a capable fighter and leader. He's also Geralt's friend.

Attack Potency: At least Small Building level, possibly Building level+ (Can damage Wild Hunt members who can take hits from and damage Geralt, who at his weakest can kill dragons. Can somewhat damage Geralt in a boxing fight. Considerably superior to fodder soldiers, who can survive being smacked around by the Golyat as seen in Blood and Wine)

Speed: At least Superhuman (Most fodder can easily outrun wolves and boars at their peak, with Vernon being superior to them) with likely Massively Hypersonic+ combat speed and reactions (Can keep up with Wild Hunt members and is somewhat comparable to Geralt in battle, though slower)

Lifting Strength: At least Athletic Human (Can lift big swords and swing them with ease)

Stamina: High (Is a war veteran who can fight for many hours or even days during battles. Wasn't showing any tiring signs after the battle of Kaer Morhen)

Standard Equipment: Sword and his bow

Intelligence: Gifted (Is a great leader and one of Foltest's most trusted men)

Retrieved from "https://vsbattles.fandom.com/wiki/Vernon_Roche?oldid=6250012"
Community content is available under CC-BY-SA unless otherwise noted.