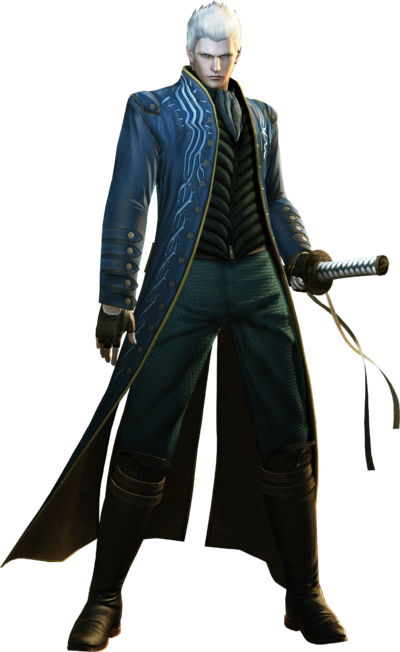 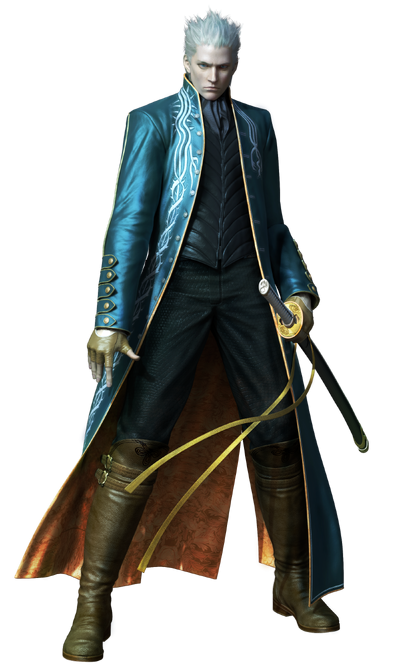 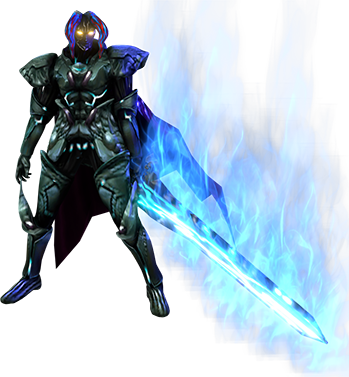 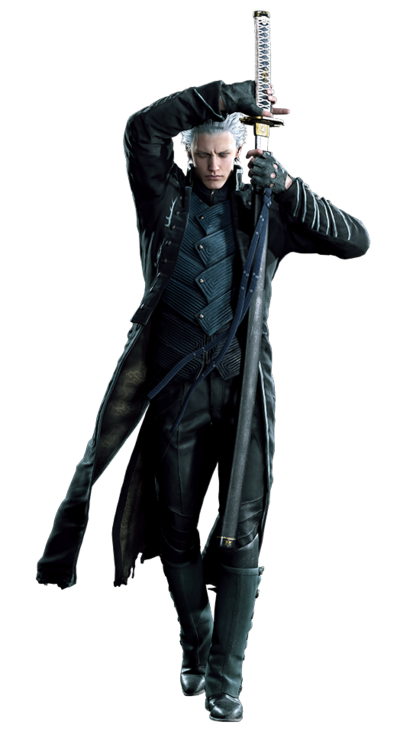 This profile contains spoilers for the game Devil May Cry 5. Proceed with caution.

Vergil was one of the twin sons born from the demon Sparda and human Eva and is the main antagonist of Devil May Cry 3: Dante's Awakening and a playable character in its special edition. Following the death of their mother as children, Vergil and Dante go their separate ways, with Vergil rejecting his humanness and embracing his demonic heritage, contrasting his younger brother's embrace of humanity and initial rejection of the devil. Stoic and reserved, Vergil displays a willingness to do anything in his quest to obtain the power of his father, Sparda.

In an unknown conclusion to a confrontation with Mundus in the secret ending to Devil May Cry 3, he is corrupted. He becomes the Dark Angel encountered in Devil May Cry, known as Nelo Angelo (also alternatively spelled Nero Angelo). After numerous conflicts throughout the game, he is finally defeated by Dante.

He later makes a playable appearance in Devil May Cry 4: Special Edition, where he is featured in his campaign detailing his actions in the city of Fortuna decades before the events of 4, and shortly before 3.

Superhuman Physical Characteristics, Enhanced Senses (Enhanced Sixth, could sense Lady while being at the top of the Temen-ni-gru, can see souls and the spirits that Hell Greed summons, can likely see the aura of his opponents just like Dante), Regeneration (Mid, comparable to Dante, who can walk off shots to the head and instantly regenerate from major impalement. Has also instantly regenerated from disembowelment while being significantly exhausted), Self-Sustenance (Types 1 & 2), Magic, Unholy Manipulation, Master Swordsman, Afterimage Creation, Soul Manipulation; Durability Negation, Spatial Manipulation, Resurrection, Biological Manipulation, Memory Manipulation, Portal Creation, Dimensional Travel, and BFR (With Yamato, he can separate his human and demon sides with his sword, and can easily create portals and cut through space. He also separated his memories and gave them a physical form; this, however, is not combat applicable); Conceptual Manipulation (Type 3. Like his brother and father, he can erase or restore demons names), Forcefield Creation, Light Manipulation (With Beowulf), Wind Manipulation (With Force Edge, able to create a whirlwind vacuum when thrown); Summoning and Homing Attack (Can summon spectral swords that can attack his opponents from all directions); Teleportation, Non-Physical Interaction (Can harm intangible and incorporeal beings), Aura; Statistics Amplification, Immortality (Types 1 & 3), Fear Manipulation and Empowerment with Devil Trigger (The mere presence of demons causes fear, can also feed off despair and get stronger from it)

Resistant to the Following: Telepathy/Illusions (Broke free of a hostile demonic illusion that was able to drive normal people mad), Extreme Cold, Cosmic Radiations, Reality Warping, Transmutation, Size Manipulation, Petrification (Demons are stated to be resistant to the Beastheads assimilation process, which includes those abilities, scaling from Dante), Soul Manipulation (Scales from other demons, who can handle going through the crust of the demon world, which is stated to turn souls into monsters), Biological Manipulation (Is capable of wielding the Force Edge without turning into a giant blob monster like Arkham), Paralysis Inducement (Is capable of fighting off the Soul Eaters, who are stated to paralyze their prey), Corruption (Type 3. Can breathe on demonic air, which turns normal people into monsters), likely Sealing with Yamato (It can cut through and create portals between the Human and Demon World, said dimensions had their connection sealed by Sparda in the past), Madness Manipulation (Type 3, endured being in the Demon World, which causes despair and insanity), Disease Manipulation (Approaching the Demon World, being inside or near a Demon World nexus causes "unearthly illness" which makes it difficult to concentrate and causes intense nausea and dizziness) and Fear Manipulation (Casually fights demons, and their presence can cause fear)

All previous except for Yamato, Beowulf and Force Edge, More powerful summoned swords, Illusion Creation (Disguised himself as his brother when he appeared in the mirror), Fire Manipulation (Can attack with blue fire and enhance physicals attacks with it), Soul Manipulation, Teleportation, Resistance to Time Stop (Unaffected by Dante's Time Stop), and Mind Manipulation (Battled against Mundus' control over his mind and body during the game)

All previous abilities on a much higher scale except Force Edge and Beowulf, Enhanced Regeneration while in Devil Trigger (Low-High; far superior to Sid, who can come back from a puddle of blood), Matter Manipulation (Created and dispelled a tree molecular wise); Statistics Amplification, Flight and Duplication (Manifested a duplicate of himself) in Sin Devil Trigger, Resistance to Absolute Zero (Fought Dante who had King Cerberus; hired and chained King Cerberus in the Qliphoth for it's Absolute Zero powers)

This is Vergil's primary weapon Yamato. It ignores conventional durability. Examples of this are when Yamato pierced through Nero's Devil Bringer which was supposed to be an indestructible demonic arm. And cut open a dimensional wall to aid Dante against Arkham, and has many showings of spatial cutting. Yamato has also been shown to be capable of slicing targets dozens of meters away with ease.

Flash gauntlets and greaves, which had enough power to launch Beowulf into the air from an uppercut and slice him in half with an axe kick. It also demonstrates Vergil's skill in hand to hand combat, here are a few moves which show this. Lunar Phase and Beowulf Combo B.

A blade similar in power to Rebellion, it is the sealed form of the sword wielded by Sparda himself, Vergil dual-wields it with Yamato in combat. Vergil is capable of throwing the Force Edge with such power; it creates a whirlwind vacuum and sucks any enemies in carving them up. Vergil is also capable of stabbing at tremendously high speeds with this weapon. Vergil can also use energy slashes when wielding force edge.

Vergil conjures a spectral sword that bears a resemblance to Force Edge and launches it at high speeds against his enemies. Vergil is skilled in their usage, surrounding himself with the blades and being able to shoot them out afterward if he wants, being able to summon them to surround an enemy eventually impaling them and making them rain towards an enemy also. He has also shown that he can create swords of different sizes and can wield one himself.

Intelligence: Gifted, extremely knowledgeable about the demonic world and it's legends, and also able to master new weapons with ease. | Virtually mindless, slaving to Mundus's will, but retains enough of his combat skill to fight Dante on equal terms. | Gifted.

Weaknesses: Dangerously overconfident. Can at times become a little too obsessed with beating Dante to show his superiority | Seeing items from his past causes him pain | Retains his overconfidence and his obsession with beating Dante, although he now sees it as an enjoyable rivalry and no longer desires to kill him.

Devil Trigger is a state at which Vergil utilizes the demonic portion of his bloodline to transform into a demonic state. Activated at some point in his life before his reunion with Dante, Vergil has had time to master his Devil Trigger state to the point of retaining most of his appearance even when changing into it along with a Devil Arm.

Much like his brother, not only can Vergil instantly activate Devil Trigger, he can also charge up demonic energy and release it to simultaneously damage enemies and transform. This is called Devil Trigger Explosion.

Base Devil Trigger: Vergil's natural Devil Trigger he gained sometime before his reunion with Dante. This Devil Trigger is the most basic of the Devil Trigger forms and can be accessed at anytime Vergil wishes without the need of a Devil Arm. It gives Vergil a balanced boost to all stats.

Summoned Swords: As said before, Vergil can summon spectral blades that resemble the form of the Force Edge. Through this, Vergil has numerous ways in which he uses his summoned blades for, whether it is for attacking his enemies from a distance, surrounding them with it or from atop, or have the blades move around himself for both defense and to attack enemies that get too close to him.

Judgement Cut: A signature move Vergil performs with his Yamato. By using the space-cutting properties of the sword, Vergil can simply attack his enemies from a distance by cutting through the air where it sends a dark purple like distortion that is then covered in slashes, cutting anyone caught in it to shreds. Vergil can also send multiple Judgement Cuts in rapid succession, allowing him to catch his target off guard and overwhelm them. 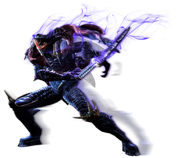 Vergil in DMC 5, featuring Yamato.
Add a photo to this gallery

Vegeta (Dragon Ball) Vegeta's Profile (Both were Low 2-C, and speed was equalized. They start at 50 meters from each other)

Nero (Devil May Cry) Nero's profile (Both were 7-B)

Start a Discussion Discussions about Vergil (Devil May Cry)