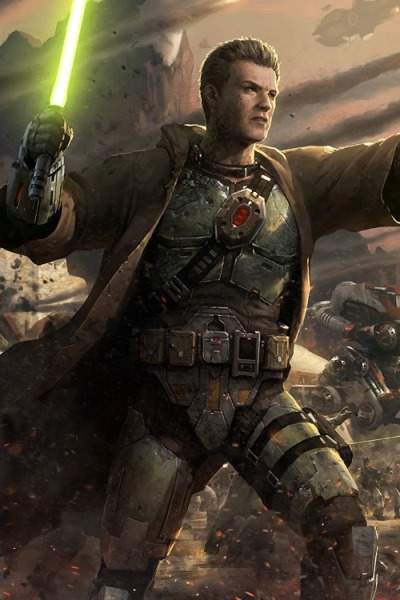 Ven Zallow was a human male Jedi Master during the days of the Old Republic. By 3653 BBY, Zallow had become quite renowned throughout the galaxy as an extremely powerful and highly skilled Jedi. This was proven during the Sacking of Coruscant led by Darth Malgus, during which, he fought mostly evenly against the powerful Dark Side adept and even had him on the defensive at one point. However, he would eventually fall to his opponent's blade. Zallow's reputation was such that he was regarded as the most famous kill of Malgus and was even held in high regard by Malgus himself - the Sith Lord appreciating his drive to improve through combat despite his allegiance to "Jedi blasphemy".

Age: Unknown, likely mid to late 40s at the time of death

Attack Potency: Planet level (One of the most powerful Jedi of his time. During the Sacking of Coruscant, Darth Malgus, one of the most powerful Dark Side adepts in the Sith Empire, considered Zallow to be the only one in the Jedi Temple worth his attention. Zallow has fought against and bested Lord Adraas, a long-time rival of Malgus. He then went on to fight mostly evenly against Malgus himself and even had him on the defensive at one point)

Speed: Relativistic (His speed & agility were such that even Darth Malgus had a difficult time with him. Superior to his former Padawan Aryn Leneer, who is so fast that a millisecond to her feels like a whole minute), FTL reactions and combat speed

Lifting Strength: Peak Human naturally. Can be augmented to Superhuman levels with the Force. Class G with telekinesis (Scales to the likes of Kao Cen Darach and Darth Malgus)

Striking Strength: Planet Class with Force Amplification (Can match Malgus in physical strength. Delivered a blow to Malgus which was strong enough to knock out a tooth and damage part of his Armor which can take thermal detonator explosions)

Stamina: Very high. Fought and killed half a dozen Sith Acolytes, then went on to best Lord Adraas, then fought against Darth Malgus for a good while.

Range: Extended melee range with lightsaber, dozens of meters with telekinesis, likely Interstellar to Galactic with Force Senses and telepathy (Should be superior to his former Padawan - who was able to sense his death from 5,000 light-years away)

Intelligence: Gifted. Is a highly skilled and dangerous combatant with decades of experience. Is also hinted as being quite wise and a great teacher.

Retrieved from "https://vsbattles.fandom.com/wiki/Ven_Zallow?oldid=6619050"
Community content is available under CC-BY-SA unless otherwise noted.