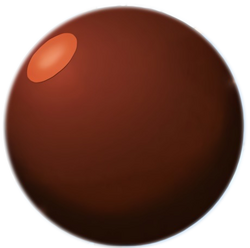 Vegito is the Potara Fusion of Son Goku and Vegeta, originally formed to defeat Majin Buu after he had absorbed Gohan, and later reappearing to fight Fusion Zamasu. While all fusions have immense power, Vegito's power is abnormal even by Potara standards, as Vegeta and Goku's intense rivalry has brought out an exceptional power.

Age: Up to an hour

Powers and Abilities: Master Martial Artist, Superhuman Physical Characteristics, Acrobatics, Ki Manipulation (Can be used defensively and offensively, to strengthen his skin or to fire ki blasts, which can home in on targets, change the weather, and form defensive barriers that can render absorption ineffective), Ki Sensing (Can locate others by reading their ki, detect malicious intent, difference in power levels, and beings in different dimensions), Enhanced Senses (Saiyans have exceptional senses, allowing Vegito to locate small, distant objects by tracking their smell, see clearly over long distances, and track the movements of others even in pitch black conditions by feeling vibrations in the air), Flight, Reactive Power Level (As a Saiyan, Vegito grows stronger every time he fights and can become stronger in the midst of combat, vastly increasing in strength whenever he is mortally injured), Rage Power, Shockwaves Generation, Afterimage Creation, Pressure Point Strikes, Power Mimicry (Like Goku, Vegito should be able to easily replicate other Ki-based techniques after seeing them once), Light Manipulation (Can create flashes of light to blind opponents and Super Saiyan forms can generate light in pitch-black condition), Healing, Telepathy (Can telepathically communicate with others and read minds), Telekinesis (He can use this to cause opponents to suddenly burst apart from the inside with an explosion), Can project fire balls, Teleportation, Dimensional Travel, BFR, Self-Destruction, Can possibly create dimensional rifts via Vice Shout, Statistics Amplification (Should be capable of using Kaio-ken to greatly enhance his capabilities by potentially up to twenty times), Transformation (Can transform into a Super Saiyan, increasing his capabilities drastically), Adapted to gravity, Resistance to Cold, Radiations, Poison, Paralysis, Mind Control (Should possess a will similar to Vegeta's, who was capable of overpowering Babidi's hold on his mind). Limited Resistance to Transmutation (Even after Buu turned him into a jawbreaker, Vegito was capable of fighting and overpowering him), As a jawbreaker, he seemingly loses all of his ki related abilities, but retains all of his strength and durability in addition to his natural skill and flight while also gaining even greater speed, Small Size (Type 2), and Inorganic Physiology | All previous abilities, Analytical Prediction, Energy / Ki Absorption as a Super Saiyan Blue, Sealing with the Mafuba, Can destroy space-time and pocket dimensions with his energy via powerscaling, Resistance to Extrasensory Perception (Cannot be sensed by beings less than a God as a Super Saiyan Blue), Heat, and Time Stop (Goku was capable of resisting Hit's attempts to stop him in time as a Super Saiyan Blue with Kaio-ken x10, and Vegito should have similar resistance), Regeneration (Mid-Low)

Speed: At least FTL+ (Casually blitzed Super Buu. As a jawbreaker, his speed becomes even greater, which, along with his small size, makes him very difficult to hit) | Massively FTL+ (Fusion Zamasu, who casually outpaced Goku and Vegeta at once, had great difficulty keeping up with Vegito)

Durability: Solar System level (Nothing Buu could do harmed him in the slightest) | Universe level (Traded blows with Fusion Zamasu)

Stamina: Very high. As a fusion of Vegeta and Goku, Vegito should have comparable stamina. He never tired in his "fight" against Buu, and his fusees have withstood extreme punishment and kept on fighting. However, given that his fusion can only last for an hour at most, his stamina is irrelevant as he will eventually defuse. As a jawbreaker, his stamina should be the same if not even higher due to Inorganic Physiology.

Intelligence: With a combination of Vegeta's cunning and Goku's prodigal skill, Vegito is an extremely intelligent individual when it comes to combat, with skill that is matched only by the greatest of opponents. He should possess Goku's mastery of ki and understanding of the Super Saiyan transformations and their costs and his ability to effortlessly replicate other ki-based techniques, along with Vegeta's cunning and skill at reading his opponents' movements. He feigned arrogance in his fight with Super Buu, smugly toying with him to bait him into trying to absorb him so that he could rescue all those he had absorbed, and when he went on to fight Zamasu years later, he discarded this overconfident persona and fought fully seriously.

Weaknesses: Vegito cannot survive in the vacuum of space and needs to locate a ki signature to teleport using Instant Transmission. The Potara fusion only lasts an hour for mortals, and the immense power of Super Saiyan Blue decreases this time substantially. The Mafuba requires a suitable container to seal the target into. As a jawbreaker, while he gains a huge speed boost and becomes much harder to hit while retaining all of his strength, he seems to be unable to use any of his ki related techniques other than his flight.

Ki: The fighting power and life force of a martial artist, a tangible energy derived from the user's vigor, courage, and mind. It can be used in a number of ways, such as to surpass the limits of one's body to greatly increase in strength, and it can be fired as blasts of energy or used to create defensive barriers. Along with his Saiyan blood and nature as a Potara fusion, Ki acts as the source of Vegito's incredible power and abilities. Possessing an immensely high power due to his fusee's rivalry, Vegito has access to a ridiculous amount of power and has knowledge of all his fusee's techniques, alongside a host of his own.

Mafuba: Also known as the Evil Containment Wave, the Mafuba is a mystic sealing technique designed to seal evil away by sucking them into a special container with a "demon seal" ofuda on it. Goku learned this technique from Roshi, and attempted to use it to seal Future Zamasu, but used the wrong tag, allowing him to break free.

Saiyan Physiology: The physiology of a Saiyan, an aggressive warrior race of conquerors. Saiyans have the natural ability to control ki and to fly. In addition, while his lifespan is comparable to that of a human, Vegito will remain at his peak strength for much longer. One of the most powerful abilities of a Saiyan is their ability to grow stronger and stronger through combat, allowing Vegito to constantly push his own limits during a fight and rise to higher and higher peaks in power. This ability grants a substantial boost in power when Vegito is badly injured, allowing him to reach a whole new level of power once he recovers.