VS Battles Wiki
Register
Don't have an account?
Sign In
Advertisement
in: Characters, Dragon Ball, Adaptation Users,
and 46 more 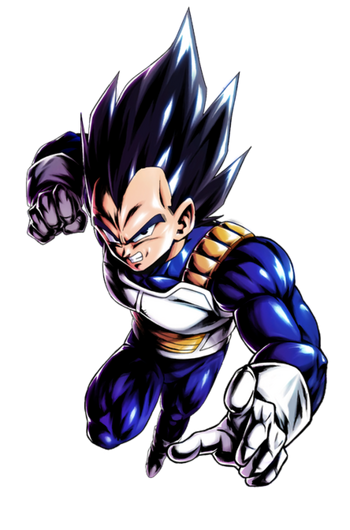 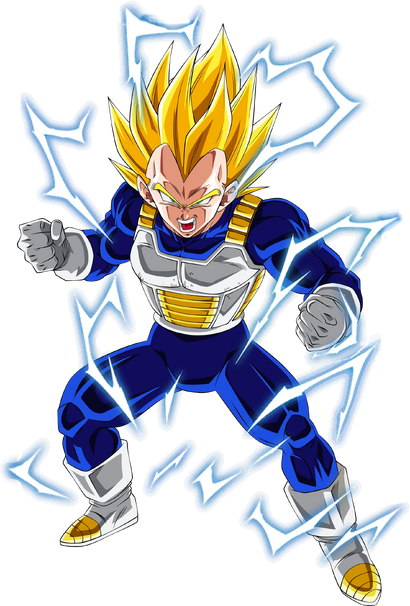 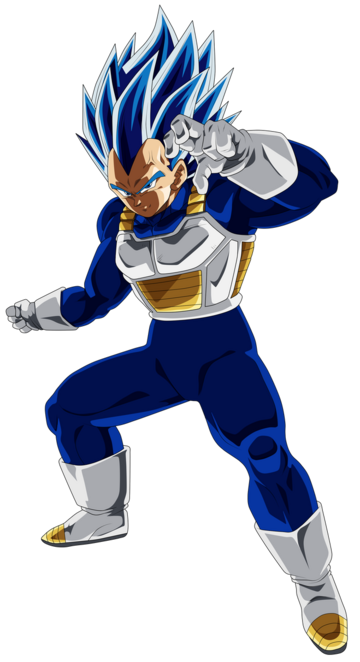 Vegeta is the disgraced prince of the Saiyan race, one of the few survivors of his species after Frieza destroyed Planet Vegeta. Left with no choice but to follow his orders, Vegeta traveled across the galaxy and eradicated planets for sale before he was brought to Earth by Raditz's report of the Dragon Balls, a magical set of balls that could grant him immortality. Upon arriving on Earth, he ultimately comes to encounter and fights Son Goku, the man who would go on to become his greatest rival.

Originally a selfish, arrogant, and ruthless killer with no concern but himself, Vegeta slowly grows into a more heroic figure over the course of his goal to become the strongest fighter in the universe, falling in love with Bulma, having a son and a daughter, Trunks and Bulla respectively, without ever losing sight of his rivalry with Goku.

Powers and Abilities: Master Martial Artist, Superhuman Physical Characteristics, Ki Manipulation (Can be used defensively and offensively, to strengthen his skin or to fire ki blasts, which can home in on targets, and form defensive barriers that render Absorption ineffective, and he changed the weather by powering up), Ki Sensing (Can locate others by reading their ki), Supernatural Willpower (he was able to resist Babidi's mind control through sheer will), Enhanced Senses (Saiyans have exceptional senses, allowing Vegeta locate small, distant objects by tracking their smell, see clearly over long distances, and track the movements of others even in pitch black conditions by feeling vibrations in the air), Acrobatics, Pressure Point Strikes, Explosion Manipulation (via Dirty Fireworks), Can project fire balls, Flight, Accelerated Development (Training; Physical Stats, Abilities), Reactive Power Level (As a Saiyan, Vegeta grows stronger every time he fights and can become stronger in the midst of combat, vastly increasing in strength whenever he is mortally injured), Shockwaves Generation, Afterimage Creation, Power Mimicry (Presumably copied Krillin's Kienzan), Telekinesis (He can use this to cause opponents to suddenly burst apart from the inside with an explosion), Rage Power, Light Manipulation (Super Saiyan forms can generate light in pitch-black condition), Self-Destruction, Transformation (Can transform into various Super Saiyan transformations, increasing his capabilities drastically), Resistance to Cold, Radiations, and Mind Manipulation (Vegeta was able to overpower Babidi's hold on his mind through sheer willpower), Adapted up to over 450° times Earth's gravity via the Gravity Machine in the Buu Saga, Fusionism (Via Potara Earrings) | All previous abilities, Energy / Ki Absorption as a Super Saiyan God and Blue, Can possibly create dimensional rifts and even destroy space-time and pocket dimensions with his energy, Resistance to Extrasensory Perception (Cannot be sensed by beings lesser than a God as a Super Saiyan God and Blue) and Heat | All previous abilities, Regeneration (Mid-Low), Resistance to Electricity Manipulation (Unaffected by Fusion Zamasu's Lightning of Absolution after they power up further), Absolute Zero and Empathic Manipulation | All previous abilities, as well as Resistance to Void Manipulation, Existence Erasure (Was able to overpower Toppo's Energy of Destruction could erase anything, even soul from existence and warping World of Void, as well as being able to lock fists with him while Toppo was cloaked in the same applied Destruction energy), Limited Power Nullification (Nullified Toppo's energy attacks) | All previous abilities prior to Super Saiyan Blue Evolution, Fusionism (Via Fusion Dance)

Attack Potency: Solar System level (Should be stronger than his level of strength in the Buu Saga), higher with Rage Power (Landed hits on a heavily suppressed Beerus and was stated to have surpassed Super Saiyan 3 Goku as a Super Saiyan 2) | Universe level (Portrayed as equal to Goku during RoF and Universe 6 saga. Capable of further increasing his power with Super Saiyan transformations) | Universe level (Fought Goku Black on different occasions. Ultimately overpowered Super Saiyan Rosé Goku Black after training in the Room of Spirit and Time. Evenly matched Toppo as a Super Saiyan Blue, who was strong enough to force Goku to use Super Saiyan Blue Kaio-ken to fight him) | Universe level+ (After "breaking through his shell" in a manner similar to Ultra Instinct "Omen" Goku, he managed to continuously trade blows with Jiren, who had finally shown a "hint of his true power". According to Whis, he and Goku were even able to stifle Jiren, and Jiren himself mentioned that both of their respective attacks had become "sharper". After powering up further, he was able to overwhelm God of Destruction Candidate Toppo, who was stated to be equal to a God of Destruction and had warped the World of Void, an infinite realm, eventually overpowering and defeating him through the utilization of his Final Explosion, which he survived due to his power having increased astronomically from when he attempted it the first time) | Universe level, Universe level+ as a Super Saiyan Blue (After the Tournament of Power, he is seen fighting with Super Saiyan Blue Goku in the Bulma's cruise liner and in the same wasteland where they had their first fight many years ago. Later on, he fought Super Saiyan Broly alongside Goku)

Stamina: Very high. Vegeta can train for days with minimal rest while constantly pushing himself to his limits, getting up again and again to train more despite the severe damage he deals to himself in the process. In combat, Vegeta's endurance is famous, allowing him to continue fighting against the Goku and the other Z-Fighters despite his steadily worsening condition. Even after being launched into the sky by a Kaio-ken x4 Kamehameha, losing his tail, and being hit by a Spirit Bomb, Vegeta was able to stubbornly keep on fighting, refusing to die or give up. He withstood an extended, brutal beatdown in his fight with Kid Buu despite the massive difference in their power

Intelligence: Vegeta is a cunning and skilled warrior whose refined technique shocked Goku during their first fight, leaving such a lasting impression that Goku wished for him to stay alive so that he could surpass him. While he often relies on his sheer power and fighting ability to win his battles, his intelligence is not to be underestimated. During the events of the Namek Saga, Vegeta was able to keep a low profile and outmaneuver Frieza's forces, leaving them scrambling to find him while he gathered all of the Dragon Balls. In the Cell saga, destroying Android 19, he feigned confidence and strength to scare Gero into fleeing, which was greatly beneficial given how much energy 19 had drained. Finally, during his fight with Cell, he was able to exploit his overconfidence for a chance at a free blow with his Final Flash. He is skilled at reading his opponent's movements and constantly thinks out his strategies and motions in combat, to the point that Whis says he overthinks things. In the past, he often got drunk on his power whenever he got a substantial boost and discarded his more pragmatic tactics, but he has gotten less and less arrogant over time

Weaknesses: Vegeta is arrogant and prideful, and if overpowered by someone he considers below him, he can lose his temper. He also seeks strong opponents, and will therefore allow his opponents to reach their full power for the sake of a good fight

Ki: The fighting power and life force of a martial artist, a tangible energy derived from the user's vigor, courage, and mind. It can be used in a number of ways, such as to surpass the limits of one's body to greatly increase in strength, and it can be fired as blasts of energy or used to create defensive barriers. Along with his Saiyan blood, Ki acts as the source of Vegeta's incredible power and abilities. Born with an abnormally high power level, even at a young age it was believed that Vegeta would certainly surpass his father, and for many years he remained as the strongest Saiyan in the universe. In combat, Vegeta often makes use of high amounts of ki blasts, firing them in large amounts and in rapid succession to overwhelm his opponents. As opposed to other Dragon Ball characters, Vegeta has a host of signature attacks.

Saiyan Physiology: The physiology of a Saiyan, an aggressive warrior race of conquerors. Saiyans have the natural ability to control ki and to fly. While his lifespan is comparable to that of a human, Vegeta will remain at his peak strength for much longer. One of the most powerful abilities of a Saiyan is their ability to grow stronger and stronger through combat, allowing Vegeta to constantly push his own limits during a fight and rise to higher and higher peaks in power. This ability grants a substantial boost in power when Vegeta is badly injured, allowing him to reach a whole new level of power once he recovers.

Frieza (Dragon Ball) Frieza's Profile (SSB Vegeta during the beginning of the ToP and Golden Frieza after his training in Hell were used. Fight takes place in the Tournament of Power arena)