VS Battles Wiki
Register
Don't have an account?
Sign In
Advertisement
in: Lookism, Webcomic Characters, Characters,
and 8 more 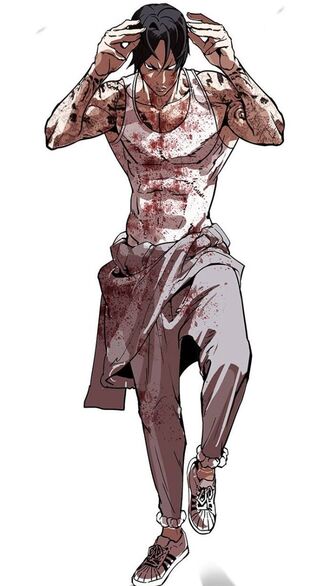 Lee Eun Taie, more popularly known as Vasco, is the leader of Burn Knuckes of J High. He is a student in the Architecture Department and famous for forming a large faction that converted former thugs into better fellows. He is one of the main characters being one of Daniel Park's closest friends and has been a key reason to his change and growth as a person. Despite his fearsome appearance which scares off anyone, he is a good person at heart and fights for Justice and those bullied.

Sadly his fearsome appearance is what drives ladies who might find him attractive away.

Powers and Abilities: Superhuman Physical Characteristics (Easily one of the strongest characters in the series being easily superior to Daniel's earlier form and Seonong Ham whom fell off the fifth floor and was just fine), High pain tolerance (After being punched by Gun, was able to fake being okay), Resistance to Cold Temperatures (While in a -45 F/-50 C Weather swam in a river for a long period of time in order to find a fallen gift), Social Influencing (Leads and has recruited many to Burn Knuckles by his word and reputation alone) | Most of his previous abilities enhanced, Muay Thai (Specializes in Muay Thai when taught by Thailand's Star Brekdak)

Attack Potency: At least Street level (Cracked concrete with his fist. Frequently sends men flying with his punches. Able to hurt several adults by swinging another adult at them. Can send a man flying by hitting him with a pillow. Should be superior to Daniel's weaker form whom quickly got off of being slammed onto a car with enough force to bend the metal), likely higher (One of the strongest out of Lookism's cast) | At least Street level to Wall level (Should be superior to Seonong Ham, whom fell off five floors and 'ran off' the injuries, while inducing fear to him Bent two pieces of steel with effort)

Speed: Superhuman (Should be comparable to Daniel Park, Zack Lee, and Johan Seong. Those three are easily the fastest of the verse and Johan is able to punch down multiple rocks before they can reach his mom), likely Supersonic (Through a calc, Johan punched down at least 40 rocks before they could reach his mom) | At least Superhuman, likely at least Supersonic (Through a scaling chain (Original Calc < Pre-Timeskip Zack < Pre-Timeskip Johan < Current Vasco. Was also able to move behind a woman at the last second when water was about to splash her from a car passing by)

Striking Strength: Street level (Cracked concrete with his fists) | At least Wall level (Should be superior to Seonong Ham)

Durability: At least Street level, likely higher (One of the strongest in the series in terms of raw power. Should be easily above Zack who shrugged off being hit by a car) | At least Street level to Wall level (Greatly increased his training regime. No-selled having his ankle twisted by Logan. Should be comparable to Logan and Jerry Kwon, who are able to sit down and take on beatings for a long period of time with no speck of damage. In Logan's case, while being hit by metal weapons)

Stamina: High. Swam in a river long enough to get the Media's attention to find a gift his friend dropped. Ran around a city block in search of a stalker while carrying a barbell, after working out for a long period of time. Performs 200 push-ups, 200 sit-ups, 200 squats, and 20 km run everyday, likely higher.

Intelligence: Slightly Below Average; not exactly intelligent and can be clueless. However, he is sometimes competent enough to adapt to enemy tactics and pull off ingenious plans. Such as when he was able to track down a location just by seeing a picture of it alone.

Weaknesses: Reliant on raw physical power and lacks technique. Can be clueless at times. Greatly fears ghosts and gets motion sick. Scares off too many girls without knowing. | Same as before but very little issue with techniques as he learned Muay Thai now.