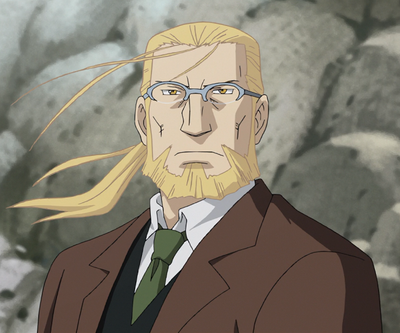 Van Hohenheim (ヴァン・ホーエンハイム, Ban Hōenhaimu) is a deceptively ancient and extremely powerful Alchemist as well as the estranged father of Edward and Alphonse Elric. Despite disappearing suddenly during their infancy, Hohenheim returns during the course of the series in order to right the wrongs of his mysterious past.

Powers and Abilities: Superhuman Physical Characteristics, Immortality (Types 1 and 3), Self-Sustenance (Type 2), Weather Sensing, Regeneration (Low-High. After getting his body reconstructed from getting immortality, he is a living philosopher stone. His regeneration should be superior to other Homucili like Lust. Regeneration will not happen if the amount of soul that he has is low, also), Transmutation, Matter Manipulation, Soul Manipulation

Attack Potency: Town level (Originally he and Father obtained and divided all the souls of the people of Xerxes between the two of them, he considers himself to be a Philosopher's Stone; therefore, he should have at least comparable power to Kimblee)

Speed: Supersonic+ (Had to escape from Pride and is comparable to Father with all the sins removed)

Durability: Town level (Took Father's attack while shielding the others)

Weaknesses: He is not used to fighting, and Alchemy and regeneration drain his souls. If killed enough times, Van Hohenheim will lose all his souls and will lose his ability to regenerate.