For detailed information about the series, see: Valkyrie Drive Wiki. 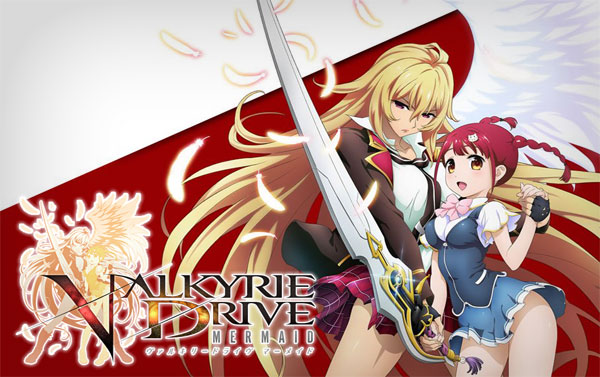 Valkyrie Drive (ヴァルキリードライヴ, Varukirī Doraivu) is a Japanese media franchise created by Marvelous, which was announced at the AnimeJapan convention in March 2015. The franchise consists of three projects; Mermaid (マーメイド Māmeido), a television anime series produced by Arms Corporation, which began airing in Japan from October 10, 2015; Bhikkhuni (ビクニ Bikuni), a PlayStation Vita game to be released on December 10, 2015; and Siren (セイレーン Seirēn), a social game for iOS and Android devices.

Each of the series revolves around girls who have been infected with a mysterious virus known as the A Virus (Armed Virus). These girls are divided into two classes; Exters (エクスター Ekusutā), who can transform into weapons when sexually aroused, and Liberators (リブレイター Ribureitā), who have the power to wield an Exter's weapon form, known as Liberator Arms, through a process known as Drive. These girls are brought to separate islands, which each of the series is named after.

Mermaid follows an Exter named Mamori Tokonome who forms a partnership with the Liberator Mirei Shikishima. Bhikkuni follows two sisters, Rinka and Ranka Kagurazaka, who are infected with a variation of the A Virus known as the V Virus.

The verse is still fresh and thus hasn't had ample opportunity to show much in the way of power, but at the moment the S Class characters are around building level with supersonic speeds.

Retrieved from "https://vsbattles.fandom.com/wiki/Valkyrie_Drive?oldid=4402958"
Community content is available under CC-BY-SA unless otherwise noted.