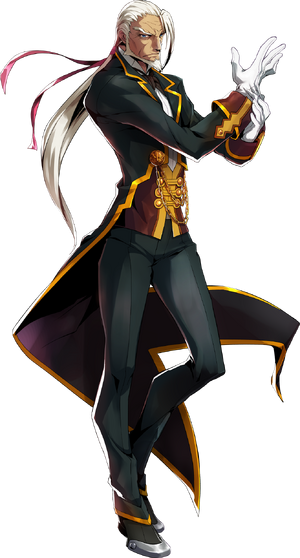 Valkenhayn R. Hellsing, also known as the Sagacious Gray Wolf, is Rachel Alucard’s elderly butler and trusted adviser who has served the Alucard family line for generations, as well as one of the Six Heroes. He first became playable as a DLC character in BlazBlue: Continuum Shift. His life-force value is around 2,394,211. Valkenhayn is a noble gentleman: polite and courteous in all situations. Being a butler, he is extremely devoted to Rachel and does whatever he can to assist and protect her. His demeanor, however, belies a savage side which is only seen during battle or when he is pushed to the brink of his anger. He uses a fighting style that, while awe-inspiring, is unbelievably brutal, utilizing slashing attacks and blows so powerful they look like they are intended to break the enemy’s bones.

Superhuman Physical Characteristics, Self-Sustenance (type 1 [Can withstand the Edge, which has no oxygen]), Martial Artist, Limited Glyph Creation (Can create glyphs when unleashing his power), Ars Magus User, Acausality (Type 1; Is unaffected by the effects from a Phenomena Intervention, which can reset an entire timeline), Non-Physical Interaction (Can hit Izanami and Arakune), Invulnerability (Is immune to conventional weapons due to existing outside of Logic), Transformation, Enhanced Senses (Heard Rachel's call across dimensions), Power Bestowal (Can unlock other people's abilities), Extrasensory Perception (Can sense killing intent), Dimensional Teleportation, BFR (Teleported him and Ragna to another dimension), Pain Manipulation (Capable of causing extreme pain), Longevity (Beastkins have long lifespan), Energy Projection (Via Sieg Nägel), Statistics Amplification, Air Manipulation, Regeneration Negation (Up to High-Godly; due to being made of sorcery, he should have similar properties of Ars Magus, weapons that are capable of killing the Black Beast, a creature that has the ability of Self-Observation, which is what Terumi used to regenerate from Hakumen's Time Killer), Regeneration (Low; Stated to be able to heal at supernatural speeds)

Resistant to following: Transmutation (As a chosen, he's unaffected by the Embryo's effect to turn everything into seithr), Corrosion Inducement (Resists getting corroded by the Cauldron), Poison Manipulation, Madness Manipulation, Biological Manipulation and Statistics Reduction (Everybody can resist Seithr to some extent which is poisonous, can induce addiction and deteriorate bodies, as well as reducing the power of others), Phenomena Intervention (Due to being outside of Logic, he is resistant to phenomena intervention), Heat Manipulation (Is unfazed by the intense heat from a cauldron), Mind Manipulation (Able to resist the boundary/cauldron, which when entered or get closed, will result in taking infinite information, dating across beginning of time and all possibilities), Perception Manipulation (Resist the effects of Ars Magus, which nullifies senses of the user), Petrification and Gravity Manipulation (As someone with competent skills in Ars Magus, he should be able to replicate an Ars Magus barrier, which is stated to protect the user from these effects), Law Manipulation, Water Manipulation, Earth Manipulation, Fire Manipulation, Air Manipulation, Darkness Manipulation and Light Manipulation (Exists outside of Logic, the fundamental rules of the world, which includes the 4 elements and two great origins), Deconstruction (Is capable of being near a Black Beast without deconstructing as it's stated to do in Phase Shift), Absorption (Can fight the Black Beast without being absorbed), Soul Manipulation, Healing and Regeneration Negation (up to High-Godly) and Fear Manipulation (Is capable of fighting against Ragna numerous times with the Azure, which can inflict soul damage beyond the help of a multiversal entity, and negate any form of Recovery and is also unfazed by his passive fear hax, can also shrug off blows from the Azure, which is superior in terms of regeneration negating capabilities than a Nox Nyctores, which are superior to Ars Magus, weapons that are capable of killing the Black Beast, a creature that has the ability of Self-Observation, which is what Terumi used to regenerate from Hakumen's Time Killer), Physics Manipulation (Could tanks blows from Azrael, who is so strong that he bends and breaks physics whenever he strikes), Void Manipulation and Corruption (Type 3) (Can resist the effects of the boundary, which can erase those that enters it, and corrupt them beyond recovery in a similar fashion to what happened to Arakune), Power Nullification (Is able to use his powers despite Kushinada's Lynchpin being activated) and Chaos Manipulation (Resist Boundary which turns everything to spiraling chaos)

Attack Potency: Large Planet level (Comparable to Relius and Hakumen. Fought The Black Beast alongside Six Heroes and with Hakumen, Jubei, NOL and Duodecim, managed to stop Black Beast's advance to Ishana for half a month. Knocked down weakened Terumi. His bite managed to pierce Clavis' hand and killed Naoto twice. Managed to trade blows with Saya and slammed her so hard that she's almost incapacitated)

Speed: At least FTL (Can keep up with the other Six Heroes, able to react to Nine)

Stamina: Very High. Able to keep up with seemingly inexhaustible Black Beast for half a month.

Intelligence: Quite intelligent, able to quickly strategize depending on situations on the fly like he did in the fight of Naoto against Spinner.

Weaknesses: He is quite short-tempered, otherwise none notable. 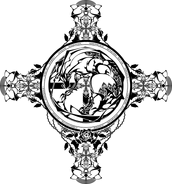 Valkenhayn as a part of Mitsurugi Agency and Immortal Breaker 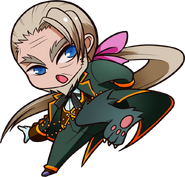