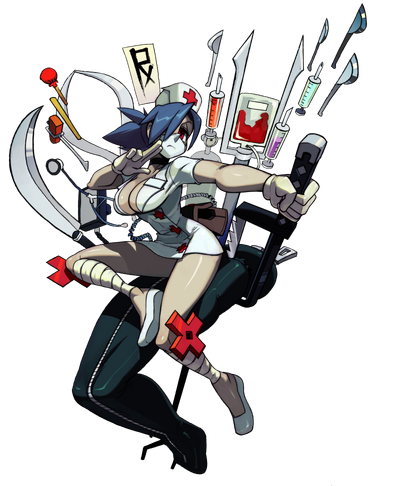 Valentine is the only survivor of the Last Hope, a group of special Anti-Skullgirl Lab operatives. Before meeting their end at the hands of the Skullgirl, the Last Hope worked for the mysterious Lab Zero and performed duties ranging from reconnaissance and sabotage to advanced research.

Now Valentine dutifully serves the Skullgirl, carrying out her will from the shadows. She keeps to herself, so much of her true nature and personality are unknown.

Attack Potency: At least Multi-City Block level (Defeated Painwheel on more than one occasion, Defeated Double, and the Skullgirl and killed Peacock in her storyline, Defeated Patty, Hallow, and Easter in training and was stated by Christmas to be the strongest member of the Last Hope)

Stamina: High (Fought three members of her unit back to back and then went on immediately afterwards to fight Double and Mari with no signs of exhaustion)

Intelligence: High (Due to her position as the former second-in-command of the Last Hope, a group of special Anti-Skullgirl Labs operatives, Valentine is highly skilled in combat. She is a master of Medical Ninjutsu, able to incorporate a wide variety of weapons into her fighting style. She is especially knowledgeable on different chemicals and poisons, as well as medical science, often referring to her own actions as parts of "experiments" or "research". She is also a highly skilled manipulator, being able to successfully trick both Marie and Double into thinking she was their ally in order to further her own goals)