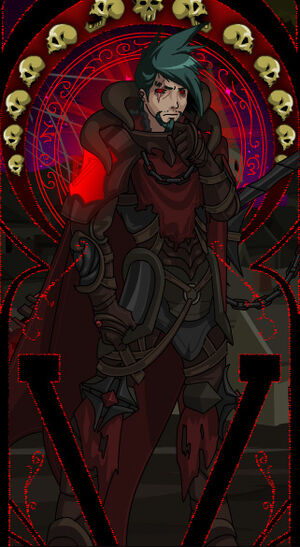 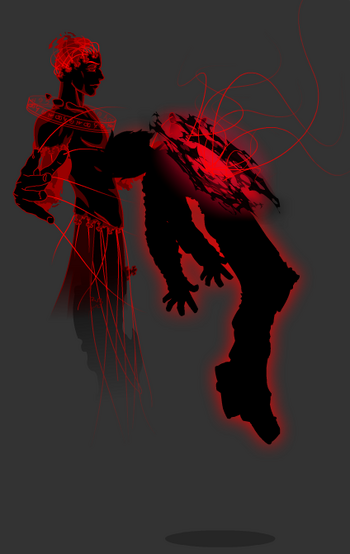 Vaal was the former ruler of Ravenloss. During his rule, he created the Wheel of Judgement. But since the Chaosweavers, the monsters he rules over, had used it improperly, Vaal made a wish that a disease spreads all over Ravenloss, resulting what the Chaosweaver looks like as we seen. At one point the weavers banished Vaal for many years. During the Ravenloss War, he had finally broke out of his prison. Tomix and The Hero asked some good source questions about the Weavers, the Embodiments, Judgement scythe, and Pellow Village. Then the Hero and Tomix leave. Vaal stays and thinks up a plan. After the Hero defeats Greed in his "human" form, Vaal interferes and destroys the evil spirit. He was disappointed that the Wheel of Judgement was shattered but he did not need it. Before he left Ravenloss with his horde of Chaosweaver Soldiers, he warned the Hero that they will meet again in the "Above Ground". In Book 3, The Hero and Tomix find the abandoned hunters paradise filled with soulless monsters, however when they start to check the rooms upstairs, they find Vaal drinking. Apparently he had lost his powers and the Chaosweavers he had under his command had abandoned him because the Wheel of Judgement was destroyed and his powers were gone without him knowing. The hero and Tomix try to coax him into being the navigator for the Void Ship they'd been working on. Vaal refused but responded to Tomix's taunt as a challenge, to which he was tricked into being the navigator. He is still hostile to the hero as when approached on the Void Ship he tells him to "stay away" until take off. After Mazurek broke the Seal of Ativa, Vaal ran through the wrong path and find himself at a very long corridor. After battling countless void monsters Vaal came across a red substance which he met Murk and was later revealed as Roirr, the first weaver and father of the Founder of the four great weaving families. Vaal then ask Roirr on how he got in there but Roirr asked him on what he knows about Murks. Vaal then then replied why he's asking him about Murks, but after Vaal replied, Roirr possessed his body turning them into Vaaloir.

Attack Potency: At least Town level (Destroyed Greed with a single bolt of energy), higher with Tanislav's Last Will (Can supposedly cast Tanislav's Last Will which shook the very balance of the fabric of space and created a link between Lore and the soon-to-be Plane of Elemental Spirits) | Unknown (Claims to have possessed power massively superior to the entirety of the Void, though the credibility of this statement is unknown) | Unknown

Range: Tens of meters, higher via Tanislav's Last Will and Wheel of Judgement

Intelligence: He is one of the most knowledgeable characters in the game but he tends to act arrogant and narcissistic.

Weaknesses: He is very arrogant. He is much weaker than he was in his prime | He loses his power if the Wheel of Judgement is destroyed, highly arrogant | None Notable

Retrieved from "https://vsbattles.fandom.com/wiki/Vaal?oldid=5377736"
Community content is available under CC-BY-SA unless otherwise noted.