VS Battles Wiki
Register
Don't have an account?
Sign In
in: Tier 9, Tier 8, V for Vendetta,
and 26 more 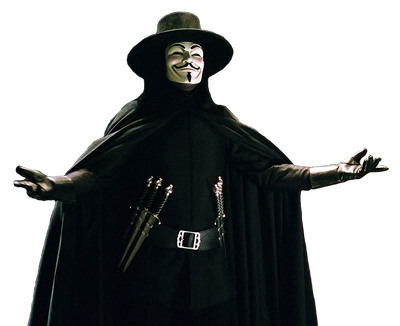 V is the main protagonist of the movie V for Vendetta, an adaptation of the comic of the same name. His origin is mostly untouched, although his goals are different and has a much more aggressive approach to the situations he is in.

Tier: 9-B physically, 8-B with preparation

Age: Unknown, at least in his mid 30s

Powers and Abilities: Superhuman Physical Characteristics, Martial Arts, Weapon Mastery (Is skilled with a variety of weapon including firearms and swords, but prefers to use knives), Expert in demolitions, Genius Intelligence, Preparation, Social Influencing (V is an extraordinarily charismatic figure who is able to invoke feelings of rebellion in the nation with his speeches and inspires thousands of people to don his mask and joining his cause), Master at Disguises

Speed: Subsonic (Blitzed several soldiers spread across a room with melee attacks faster than they could reload their guns, whilst heavily injured)

Durability: Wall level, possibly Small Building level with armor (Was hit by over nine clips of machine gun fire whilst only wearing a steel plate for protection, which was visibly penetrated, including point-blank headshots, and was still able to blitz all nine soldiers immediately afterwards; He did eventually die from his injuries, however was seen being hit once with a punch but did not move at all)

Intelligence: Genius. The experiments conducted on V increased his intellect to a remarkable level. He is extremely well-versed in a variety of fields, which includes chemistry, politics, philosophy, electronics, literature and psychology, among others, and especially with tactical planning and pyrotechnics, seeing as how he was able to destroy the Old Bailey using only over the counter materials and blew up the internment camp he was in with a bomb using only fertilizer and solvent to create mustard gas and napalm. A prep master, being able to pull of a very long-term and intricately designed plan to take down the Norsefire Government with little assistance and limited resources. Managed to kill over 40 people who survived the Larkhill Incident and made all of them look like accidents. He is extremely well-read, having hundreds of books in his hide out and can recite extended lines from them perfectly. V is a master thief, retrieving dozens of banned artworks, supplies for his plans, and even food that was sent for the Chancellor himself, and also a master of disguises, fooling both Inspector Finch and Evey without them realizing who he was, despite the horrific burns on his body.