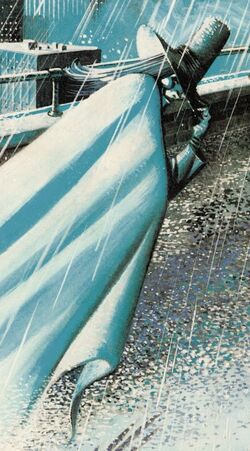 V, is a mysterious man who leads a revolution against a corrupt Dystopian society in the Vertigo comic V for Vendetta. V is a man who has escaped imprisonment from the Larkhill resettlement concentration camp in England (the setting for the dystopia), after being experimented on by the Camp's scientists with the injection of Batch-5 serum. Batch-5 is a mixture of pituarin and pinearin, a potent and unpredictable mutagen. V is the only one who survived the experiment and it actually yielded some beneficial results. He has enhanced strength, enhanced reflexes and mental capacity. He wears a Guy Fawkes mask, and bases his actions on the events of the Gunpowder Plot, and the date November the Fifth (the date that it took place).

Age: Unknown, at least in his mid 30s

Attack Potency: Street level (Capable of overpowering several trained guards at once. Punctured a hole in a man's chest with a finger), Building level with explosives (Brought down the Houses of Parliament and Lady Justice Statue)

Lifting Strength: Peak Human (Able to lift people single-handedly and throw them away)

Intelligence: A genius of chemistry, politics, philosophy, electronics, literature and psychology, among other fields, especially with tactical planning and pyrotechnics. A prep master.

Standard Tactics: Despite his extensive knowledge on martial arts, he will only engage in fights as a last resort. Most often, he uses smoke tricks, explosives, poisons and pressure points to do the job.

Note: Despite being published by Vertigo comics, V for Vendetta is not canonically part of the wider DC universe.

Start a Discussion Discussions about V (V for Vendetta)