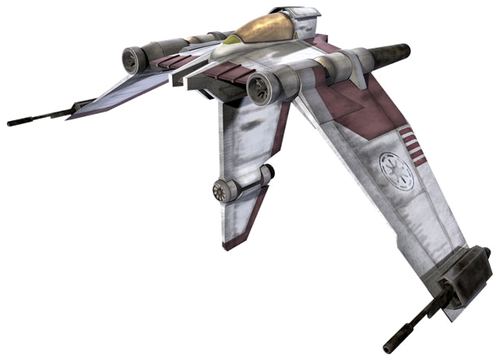 The V-19 Torrent was a model of light starfighter manufactured by Slayn & Korpil for the Galactic Republic Navy’s Starfighter Corps. A light interceptor which was reasonably well armed relative to size with outstanding speed and agility, it proved popular with Clone Pilots for much of the early Clone Wars and proved its worth throughout various notable battles.

It was phased out in the later stages of the Clone Wars in favour of the Alpha-3 Nimbus-class V-wing, which was designed to fulfil the same role and came equipped with shielding, comparable if not superior agility, more powerful laser cannons, and the option of a truncated astromech droid. After the end of the Clone Wars and during the reign of the Galactic Empire, old V-19s would see service with various pirate groups and criminal cartels. Various rebels cells would also make use of the V-19 in their struggles against the empire.

Tier: Low 7-C with laser cannons. 7-A with concussion missiles

Needed prerequisite for use: 1 trained pilot

Attack Potency: Small Town level with laser cannons (Shots from these cannons can slag the XX-series defensive turbolaser emplacements of imperial orbital battle stations. Their overall power is at least comparable to the light laser cannons of the Delta-7 interceptor and they should not be any less powerful than the laser cannons of the Patrol Transport Gunship, which was designed for law enforcement and is considered not too powerful by military standards). Mountain level with concussion missiles (More powerful than the missiles used in the Umbaran long range capital defence turrets, which have yields of 100 Megatons each, and potentially up to 800 Petajoules. A single barrage of these missiles can damage the unshielded hulls of a Munificent-class Star Frigate and Providence-class Dreadnought)

Speed: Transonic atmospheric speeds (1150+ km/hr). Can accelerate continuously to Sub-Relativistic+ speeds in space (Can match the Vulture Droid and Hyena-class Bomber). Massively FTL+ travel with hyperspace ring (Ring is equipped with a Class 1 hyperdrive. Should thus be twice as fast as Class 2 hyperdrive equipped vessels and capable of covering tens of thousands of light-years in a matter of several hours)

Durability: Large Building level+ (Overall at least as well built and durable as the likes of the Eta-2 Actis-class Light Interceptor)

Retrieved from "https://vsbattles.fandom.com/wiki/V-19_Torrent?oldid=4753649"
Community content is available under CC-BY-SA unless otherwise noted.