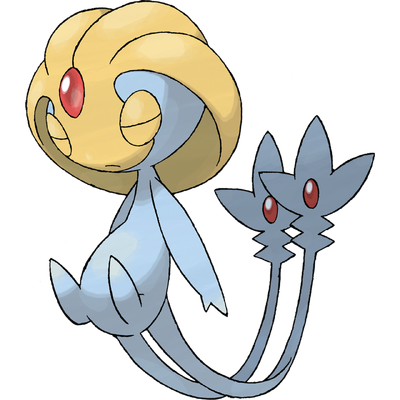 Powers and Abilities: Superhuman Physical Characteristics, Higher-Dimensional Existence, Creation, Non-Physical Interaction, Large Size (Type 9), Self-Sustenance (Types 1, 2, and 3), Avatar Creation, Immortality (Types 1), Cosmic Awareness, Information Manipulation (Can take away and give knowledge), Mind Manipulation, Telekinesis, Astral Projection, can wipe the memories of those that see it's opened eyes, Can seal any moves known by it's opponent that it also knows, can drastically weaken it's opponent by sacrificing itself, Telepathy (Connected Brock's mind with Palkia's and Dialga's), Earth Manipulation, Dream Manipulation (contacted Brock this way), Precognition (Was aware of its imminent capture and warned Brock about it), Teleportation, Forcefield, Energy Manipulation, Illusion Creation, Portal Generation, Healing (via Rest), Can prevent its defeat via Endure, Sleep Manipulation, Soul Manipulation and immunity to it, Regeneration (Mid-Low)

Attack Potency: Likely Multiverse level (Said to maintain balance against Dialga or Palkia individually, Intercepted Dialga's attack in a story wherein Dialga and Palkia created a Universe. The three together are approximately equal to a single member of the Creation Trio.)

Speed: At least Massively FTL+ (Should at least be faster than Pokémon like Necrozma), likely Infinite (Reacted to and Intercepted Dialga's attack)

Durability: Likely Multiverse level (The Lake Trio were completely unaffected by Dialga's reset of the Universe in "Pokémon Diamond and Pearl Adventure!")

Stamina: Limitless (Roams Sinnoh, seemingly unaffected by the extraction of the Red Chains and the immense pain it was forced to go through mere moments ago)

Range: Standard melee range, likely Multiversal with its abilities (Can transport Dialga and Palkia to and from the Universe, and endowed the world with spirit)

Intelligence: Nigh-Omniscient as the being and derivative of knowledge.