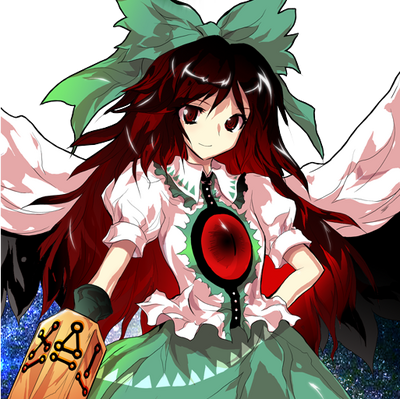 Utsuho Reiuji is one of Satori Komeiji's pets and the regulator of the flames of the former Hell of Blazing Fires. A Hell Raven, born from the darkness of Hell, Utsuho isn't the brightest, which made her a good subject for Kanako Yasaka's plan to gain the ultimate power of nuclear fusion. In her dreams, Utsuho was told to consume the remains of the sun god Yatagarasu, so she could fulfill the wishes of those above and below the surface of the world. However, she misinterpreted the message and decided that she would use her newfound, immense power to conquer all of Gensokyo and incinerate any who opposed her.

After having some sense "talked" into her, she returned to her previous job and is now using her powers to provide energy to the people of Gensokyo.

Attack Potency: High Universe level, possibly Universe level+ (Absorbed the powers of Yatagarasu and is capable of using them. Kanako has stated that she is a highly efficient host for Yatagarasu, and releasing its power is much easier than containing it. At least comparable to high tiers of Gensokyo such as Suika)

Range: At least tens of meters with Danmaku (Her firing range should be comparable to Sakuya's, who can throw knives at least 36 meters)

Standard Equipment: The "left leg of decomposition", the "right leg of fusion", and the right arm's "third leg"

Weaknesses: Utsuho can run out of the materials needed for nuclear fusion and she is vulnerable to spiritual attacks 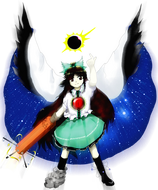 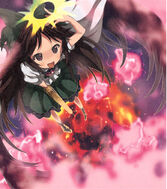