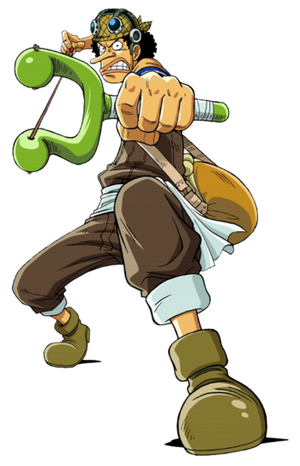 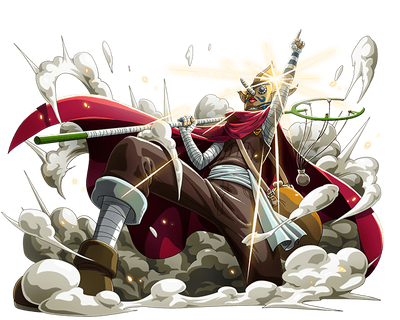 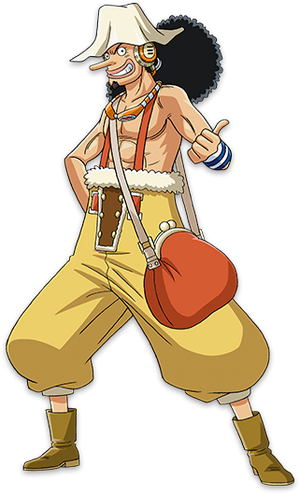 Usopp serves as the crew's sharpshooter and previously served as the (barely competent) repairman for the ship. He's the son of Yasopp, a sharpshooter serving under Shanks, and comes from the East Blue. Usopp had a reputation on his home island of being a serial liar who claimed that pirates were attacking, which came back to haunt him when real pirates actually attacked. He's a rather boastful seventeen/nineteen year-old who likes to tell tall tales (several of which actually do come true, after a fashion), though he's more prone to hiding behind the stronger crew members such as Zoro when he actually gets into a fight. However, when push comes to shove he is very dependable. He specializes in the use of a slingshot, called the Galaxy Slingshot (Ginga Pachinko), which he replaced with the Kabuto and later the Black Kabuto. These slingshot, coupled with his talent in tricking enemies, and his absurd sniping skills, make him a redoubtable sniper able to intervene at a very long range.

His dream is to better himself and become a brave warrior like his father Yasopp, who serves on board the ship captained by Shanks, Luffy’s idol. According to Word of God, he is the physically-weakest member of the crew, and his worries about not being able to keep up with the stronger members and resulting inner turmoil put him at odds with Luffy during one story arc, and ultimately resulted in the creation of an alter ego named Sogeking which he uses to draw on his inner strength and courage.

When the crew went their separate ways, he sought the teachings of Heracles on Bowin Island, spending the next two years in a treacherous forest. The experience earned him new weapons and made him a fighter that no longer turns tail at the first sight of enemies.

His first bounty, as "Sogeking", was 30,000,000 berries. Usopp was not personally wanted until after the events of Dressrosa, the government finally recognized Usopp himself by name and gave him his current bounty of 200,000,000 berries. In addition, he was given a new official epithet to go with his real name: "God" Usopp.

Powers and Abilities: Superhuman Physical Characteristics, Weapon Mastery (Mainly fights with the various gadgets and gears he has acquired or created over the years. He is a very accomplished and extremely skilled sniper), Stealth Mastery, Social Influencing (Is an adept liar, which can be useful in certain situations. Although many of his lies are outrageous, they've been shown to be a useful distraction at times; especially against gullible opponents. At times, it even succeeds as a deterrence albeit for a short period of time until his enemies figure out his bluff. He often incorporates his bluffs into his arsenal with mixed results), Minor Status Effect Inducement (Via Egg Star and Tabasco Star), Enhanced Sight (Via goggles), Smoke Manipulation (Via Smoke Star), Fire Manipulation (Via Fire Star), Limited Sound Manipulation (Via his chalkboard), Explosion Manipulation (Via Gunpower Star) | Same as before, Minor Adaptation (Adapted to the oxygen shortage), Acrobatics, Surface Scaling (Via the Octopakutsu), Impact Absorption, Shockwave Generation, Minor Durability Negation and Attack Reflection (Via an Impact Dial), Limited Light Manipulation (Via Flash Dial), Gas Manipulation (Via Flavor Dial, can store smells and aromas, along with other types of gas, such as explosive and flammable ones), Preparation (With enough preparation he can make good strategies) | Same as before to an enhanced scale, Organic Manipulation (Via Oil Star and Sticky Star) | Same as before, Inept Kenbunshoku Haki user, His creations and engagements guarantee him: Plant Manipulation(via Pop Green seeds), Shockwave Generation (Via Impact Wolf), Sleep Manipulation (Via Hissatsu Bakusui-Bosh), Fragrance Manipulation (Via Pop Green Rafflesia), Resistance to High and Low Temperatures (Barely fazed by Punk Hazard's environment) | Same as before, Healing (Low Via Toad Oil, which can instantly heal small cuts and stop bleeding)

Stamina: High, able to stand up after sustaining major injuries, such as when he fought Mr. 4 and tanked a hit from a 4-ton bat in the skull and several explosions coming from Lassoo. Faced Luffy after receiving fatal injuries from the Franky Family and even then managed to give him problems.

Range: At least Tens of Meters with Ginga Pachinko | Hundreds of meters with Kabuto (Sniped several marines from the top of a tower with the wind against him and at a distance where the marines' rifles couldn't reach him) | A kilometer with Kuro Kabuto

Intelligence: Skilled combatant and makes excellent use of his exceptional cleverness and tactical ability in battle (especially if given prep), extremely ingenious and resourceful, have made weapons as powerful as the Clima Tact and Kabuto using several different Dials. Vast knowledge of weapons. Has some knowledge of several other languages and some knowledge of ship repair.

Weaknesses: Scared all the time, takes a lot for him to use his potential, pessimistic | His inclination to fear is less apparent in battle after the timeskip, as he is more confident in himself and his abilities.

Hissatsu Shuriken Ryuu Seigun: Usopp fires a chain of several attached Shuriken which, when fired, separate into a large spread of shuriken to cover a wider radius.

Hissatsu Sakuretsu Saboten Boshi: Usopp fires a green pellet that explodes on impact and showers the victim with quills.

Atlas Suisei: Usopp shoots four high speed Kayaku Boshi with smoke tails which converge together and hit a target. The arcs the four shots make resemble the horns of an Atlas Beetle.

Hissatsu Fire Bird Star: Usopp fires what can be assumed to be a very strong Kaen Boshi in the shape of a massive phoenix, it also seems to summon a massive ring of fire once it makes contact.

Usopp Hammer: Using an ordinary work hammer, Usopp bashes his opponent on the head. Can be repeated many times for a stronger attack.

Usopp Golden Pound: A technique in which Usopp uses a "10-Ton Hammer". The hammer is almost identical to the five-ton hammer in appearance, but it is much larger. While the hammer looks intimidating, it is actually a giant balloon on a stick.

Impact Dial: A Dial that absorbs any blows directed to it and can release them back at the attacker. Usopp can thus use this to absorb a powerful blow such as Luffy's Gomu Gomu no Bazooka and release it back at the original source or any other opponent. The downside is that the recoil from the released energy is akin to the original blow.

Midori Boshi: Bamboo Javelin: Usopp fires a large number of fast growing bamboo seeds. The bamboo shoots up out of the ground and injures the enemy. 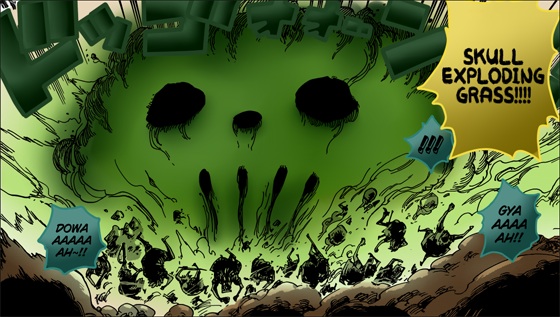 Green Star: Boaty Banana: A plant in the shape of a boat grass petals that can be used as oars, which him and others cross a body of water.

Green Star: Human Drake: A plant with living roots that hides underground, and then leaps out at any prey that walks overhead.

Green Star: Trampolia: A large flower with a bubble in the middle that launches anything that gets close to it.

Secret Attack, Green Star: Impact Wolf: Ussop fires a seed that quickly grows into the shape of a large wolf. The bulb on its nose releases a stunningly powerful shockwave. 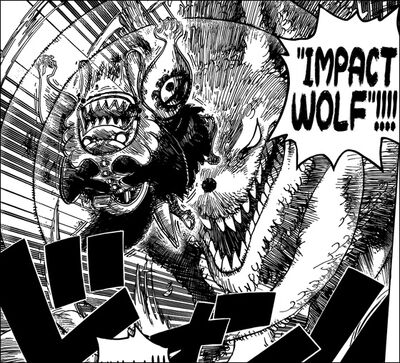 Shantae (Shantae (Verse)) Shantae's profile (Speed was equalized, both are 15 meters apart, fight took place at Saboady Archipelago, both were Low 7-B, Usopp had prior knowledge)