I'm going soon the create a profile for Nie Li from Tales of Demons and Gods, and i wanted to calculate a feat he did during a tournament. I have calculated the power of an explosion that occured during a fight between Nie Li and a foe who i don't remember the name.

Credits to Therefir for having helped me to calculate this. 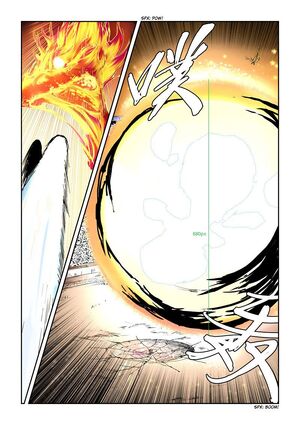 In this fight, Nie Li has transformed into a panda. I've taken the adult panda's height which varies from 1.2 to 1.9 m according to wikipedia.

We don't know Nie Li' height in base, so i'll go using the average height for a 13 years old male teenager which is 156.2 cm according to this website. Nie Li grows when he transforms into a panda so i think using the 1,9 m is appropriate.

Y is yield in tons of TNT, and x is radius in kilometers.

Since the explosion is not nuclear, we need to halve the result.

It was my first calculation so don't be too harsh ^^'.

Retrieved from "https://vsbattles.fandom.com/wiki/User_blog:The_Foolish_Omniscient_Guy/Nie_Li%27s_contribution_for_an_explosion?oldid=4392636"
Community content is available under CC-BY-SA unless otherwise noted.