1 of 2
Add photo
In order to shield the public from the FORBIDDEN POWER, the Netkings spread thick black clouds all throughout the Island.

Comparing the clouds to Mech City, comparing it to New York City due to it being it’s inspiration, which would make it about 330 miles or 531,084 meters

Comparing the city once again to the overlapped frames before and after the cloud moved within 3 frames,

Since we don’t know if a single Netking was responsible, which is likely but just as a lowball, let’s assume all 5 contributed equally

Kajet surrounds TOME with his aura

First by finding the distance TOME was away from the camera using Mech City as the object to compare,

Gamecrazed moves in tandem with light 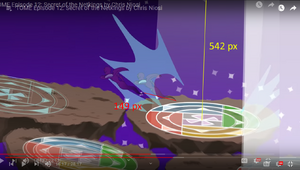 Gamecrazed moving in tandem with a beam of light summoned by Webmaster.

Retrieved from "https://vsbattles.fandom.com/wiki/User_blog:SquiTwo/The_Terrain_of_Magical_Impressive_Feats_2:_Storm_Art_Online?oldid=5521609"
Community content is available under CC-BY-SA unless otherwise noted.