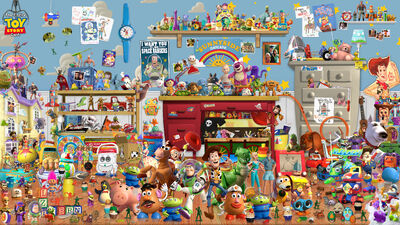 Toy Story is the story of, well toys; toys brought to life by the power of a child's imagination.

Supposedly, even the slightest touch from an imagination-filled child can bring a toy to life. A toy does not need to be manufactured, nor does it need to be humanoid, to be brought to life. Objects such as Etch-A-Sketches, Pez Dispensers, and Sporks with googly eyes have been shown to be capable of sapience, and even objects such as animal stickers have been implied to be capable of sapience.

Classification: Slaves to an unknowing humanity (Humans don't even know they're alive)

Age: Unknown (The first known doll toy was made 4000 years ago, but toys have existed since LONG before then) (When toys first came to life is unknown)

Population: Unknown, Likely Hundreds of Billions if not Trillions (Lego alone has created tens of billions of objects capable of sapience)

Territory: Across the globe, throughout almost every household

Industrial Capacity: Toys do not, for now, produce anything.

Weaknesses: Many toys run on batteries, Some toys are easy to tear apart (though this does not kill them), Most toys are relatively weak, The only known way to truly kill a toy is to completely destroy them

Retrieved from "https://vsbattles.fandom.com/wiki/User_blog:Robot972/The_Toys?oldid=4735500"
Community content is available under CC-BY-SA unless otherwise noted.