Just some more calcs made for Battle for Dream Island in commemoration of BFB 15’s release last week, some are actually upgrades, and others are just support. Anywho, lets get to it.

Apparently, he had his jet with him, and he was just fine. 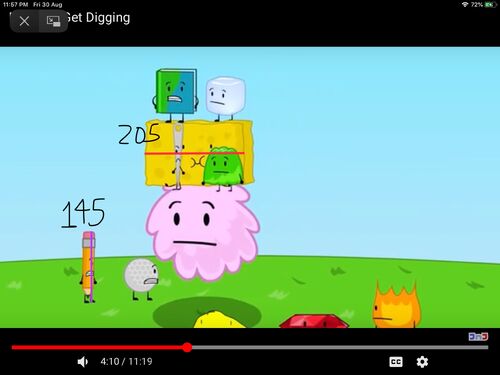 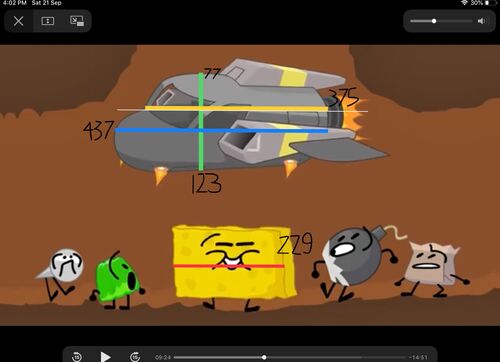 (All parts are the value for the Rectangular Prism)

As for the width, we unfortunately dont get a good glimpse of it due to bad camera positioning, so as a lowball, I will assume that the width for both upper and bottom parts is 3 meters, given that Spongy would need room to move, and also by the fact that there would be an extended table of the controls.

Im assuming that only 20% of the jet is the affected material.

This should pretty much affect the weight Bubble was carrying while she was lifting Team Ice Cube, in which Spongy brought his jet with him likely since the beginning of the challenge, which makes sense because he wouldnt have a way to get out afterwards, so he had to bring it. 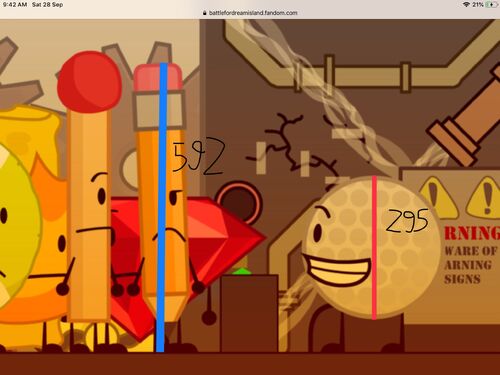 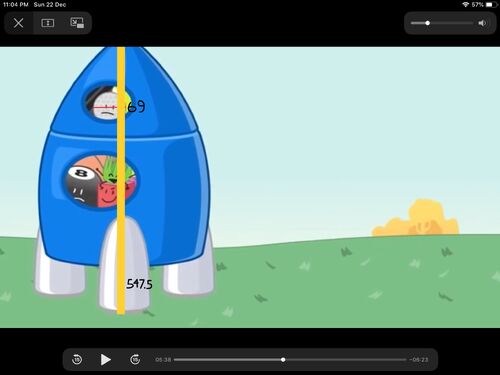 Time it flies before Saw tags it: 7.13 seconds

Ill be using the acceleration formula to find the distance, given how it makes sense that rockets are just starting up, and theyh are slowly increasing in speed.

Timeframe for Saw to jump and tag the rocket: 0.43 seconds

Timeframe for Book to jump and grab Saw’s hand: 0.51 seconds

Since all 8 members of Bleh were able to do it, I think its safe to say this scales to everyone. Also, insert joke of how BFDI now speedblitzes most of RWBY if this gets accepted

For reference, they ARE indeed referred to as asteroids, as said here. Also, note that while the asteroid seemed to be moving slower from what we see, this could most likely be Cinematic Time issues. After all, the thing WAS on fire when it was charging at Firey. 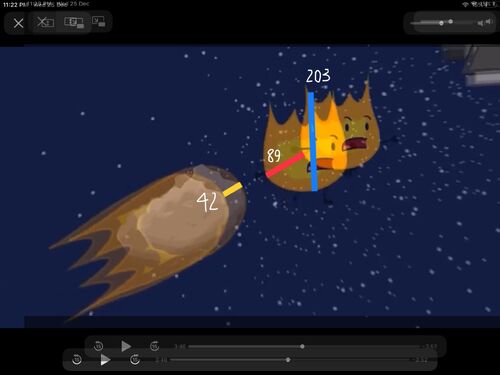 I gotta say, while hes one of the most underrated BFDI characters, he wasnt so useless after all! This pretty much supports his claim in BFB 11, and I am sure this scales to everyone who can keep up with Firey.

Now, notice how when Spongy was dodging the lasers, he was going into a loop, and actually MOVED AWAY from the laser? That means that he is pretty much moving faster than it, and I can guarentee that this is a great deal. 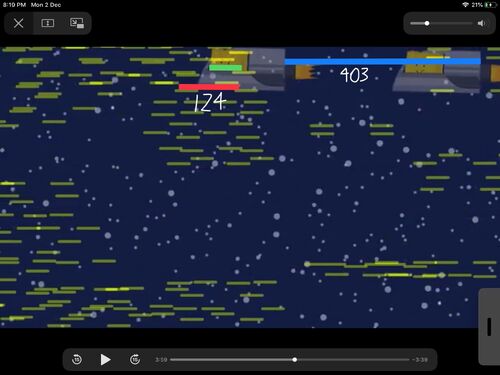 So already, the ships are capable of moving 3.25x FTL.

Puffball and Spongy fly back to Earth

Feat here, starting at 7:40. She does not appear on screen again until 8:35, to the point she already came back to Earth. 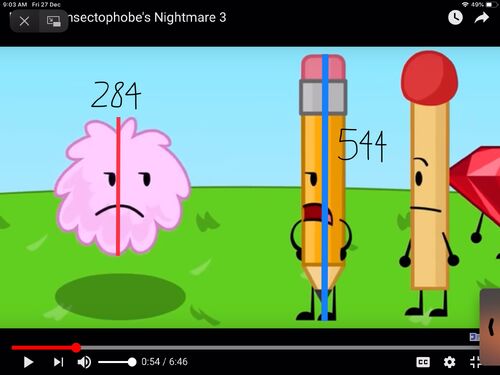 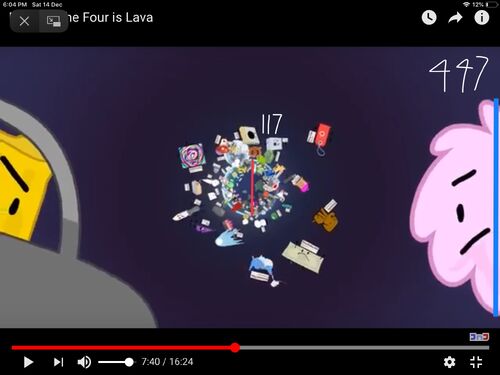 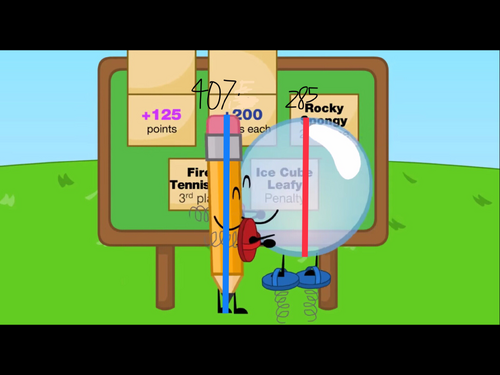 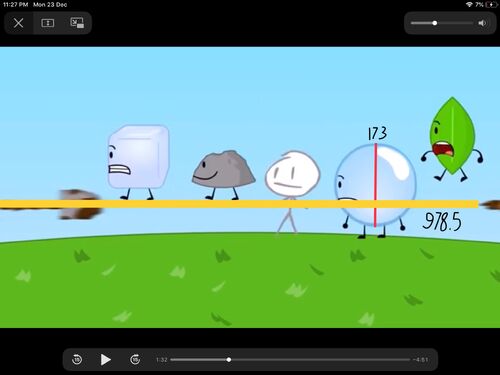 Time it takes to move: 1.6 seconds

34.754600666*1.6 is 55.6073610656 meters for Announcer’s range, or Tens of meters. This should affect his acid tear range as well, given they can travel similar distances and the fact that David, Rocky, and Ice Cube were in their same positioning when they dodged the shovels. 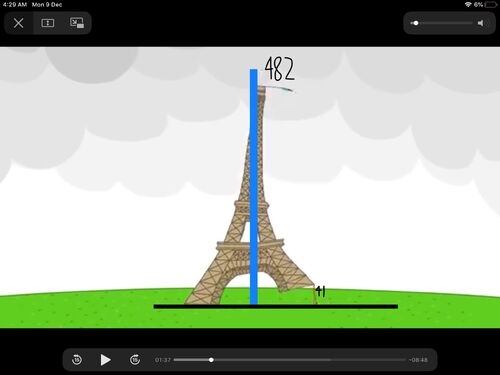 Now already, that is Class M lifting strength for Pin, but I am actually here for the PE, just for fun.

Eh, as I said, that was for fun. But if you wanna know whats REALLY fun...

The 1st, 3rd, and 4th lasers arent really visible before Flower moved, but the 2nd one was, so lets use that. 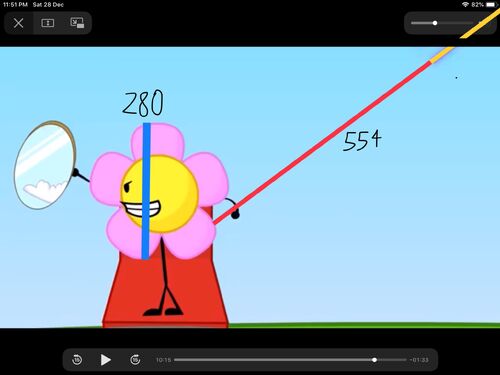 Retrieved from "https://vsbattles.fandom.com/wiki/User_blog:Psychomaster35/More_BFDI_assorted_calcs?oldid=5763154"
Community content is available under CC-BY-SA unless otherwise noted.