Ok, first off, I own none of these images, and I am not the creator of these calcs. All credit goes to Assaltwaffle and Lina Shields

So the calc will be going over the explosion Beast Cole makes when he receives John's powers and becomes the Beast. Pixel scaling is done by Assaltwaffle

Here's the map before the explosion:

Here's the map after the explosion:

The Blast takes up about this much space (Pixel scaling done by Assaltwaffle):

I will now using Lina's method of scaling the size of the explosion to the size of Florida. Pixel scaling is done by Lina: 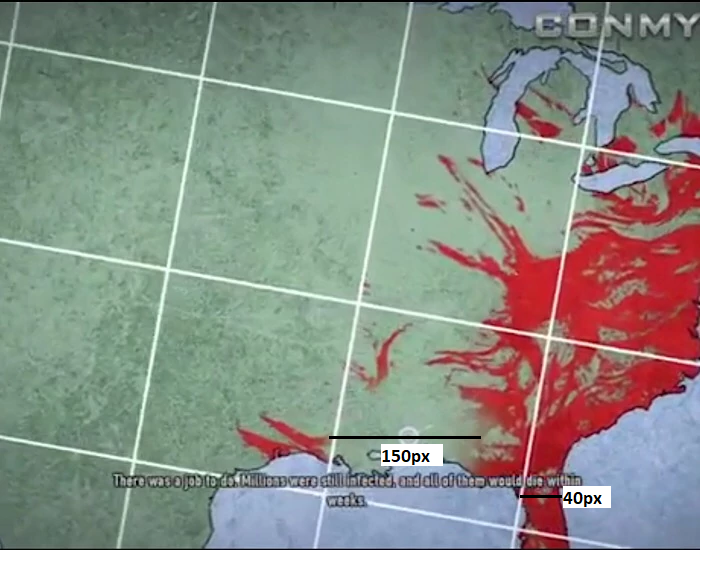 Normally for explosions, we do not use the full value of the nuke formula unless said explosion is stated to be an actual nuclear explosion, or if said explosion involved heat energy, thus we will just figure out the blast energy required to make an explosion that size.

Using the near-total fatalities for this since the explosion occurred on the ground, and not in the air. At least with this value, we know that all of the structure that were contained within the radius of the explosion were completely destroyed.

However, if I may add in my own two cents on the matter, I believe that we can use the full value of the nuke formula, here's why:

At 00:50, you see that some areas in the Empire City Crater, which was caused by an explosion of Ray Sphere Radiation, the same kind The Beast uses, are glowing red hot, meaning that they have been heated/scorched by extreme heat.

At 8:10, you see the Beast one shoting Empire City, and afterward you see the boat running away from the SMOKING remains of the city, which is basically rubble, implying that the blast burned a significant portion of it. At 9:05 you can see the radius of the Empire Blast, though, keep in mind Empire City is a fictional US city composed of three small islands (think fictional New York)

At 9:38, you see the effects of small, controlled, Ray Sphere blast burns part of a warehouse.

At 11:45 you see that a Ray Sphere exploding atomize a guy and burn/destroy part of a dock.

Here, John, the guy who was atomized, reveales that the Ray Sphere tore him apart, atom by atom.

So, most Ray Sphere blasts either incinerate/vaporize most people unfortunate enough to be caught in an explosion, or they're left as a charred corpse, meaning that they do utilize a lot of heat. This means that it is probably safe to use the full nuke value

You guys can decide which value is best

Retrieved from "https://vsbattles.fandom.com/wiki/User_blog:PTSOXMONKEY99/The_Beast_makes_a_Big_Boom_Redux?oldid=1581590"
Community content is available under CC-BY-SA unless otherwise noted.