In Chapter 56 of My Hero Academia: Vigilinates, Knuckleduster decided to detonate a bomb placed in a building in order to throw off Number 6, with the aftermath being shown at the beginning of Chapter 57. 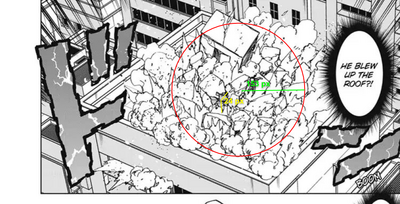 Average floor/ceiling height for residential buildings is 7.5 feet or 2.29 metres.

Now that we have the volume, we can find the energy. Floors are typically made of concrete, or so I'm told, and the debris that is caused by this happens to be very large, so it's a definite Fragmentation situation.

The fragmentation of concrete is 6 J/cc

But, since Knuckleduster say that he took out three entire floors with this explosion, we can safely multiply the KE by 3x to get the final result.

Oh, but there is more. At the end of the chapter, the building is revealed to have been reduced to rubble, which means either their clash caused this, Knuckleduster used the bombs to do this, or they fought and destroyed the building, Dragon Ball style. But either way, it's destroyed.

The Frag. of concrete is 6 J/cc

The Violent Frag. of concrete is 20 J/cc

These may scale to Knuckleduster's AP and/or Durability, or may not. I may calculate the feat where Number 6 crosses 250 metres faster than Knuckleduster could process, and where he runs to Knuckleduster before he could shoot him with a rifle.

Retrieved from "https://vsbattles.fandom.com/wiki/User_blog:Nullflowerblush/Knuckleduster_and_the_Big_Boom?oldid=5497350"
Community content is available under CC-BY-SA unless otherwise noted.