Hello, everyone! Back again with yet another DITF calc blog! This time I'll be re-calculating the first ever klaxosaur getting nuked repeatedly. It happens in Episode 19 just under 11 minutes in.

It was previously calculated here, but there is a problem with this calculation: We are told that the entire east of Australia was turned into an exclusion zone as a result of the klaxosaur appearing, which implies that the klaxosaur appeared somewhere around there. However, the calculation uses a location in the south of Australia. So this calculation will try to fix that. As we can see here, there is a location of Australia on Google Maps that resembles the location more closely. So I will use this to find the diameter of the nuke. 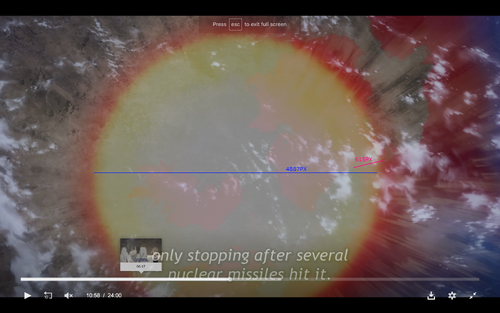 And this was just 1 nuke. The other ones were probably detonated offscreen. We're also told it was several, meaning at least 3 nukes would've hit it. So I'd say it checks out.

Reason this scales to Red Strelizia is because they killed a klaxosaur that is >= in size to this one.