CREDIT TO ChaosTheory123 for the calc. This is just for evaluation purposes only.

EDIT: This is NOT my calc btw.

Basically, Kanan and Ezra chuck a pair of asteroids at some asshole named Vez because he's cheating in some "Fool's Race" (a race of unknown distance located inside the orbital ring of some unknown planet) of his own designs

So full context is available for those that want it *shrugs* 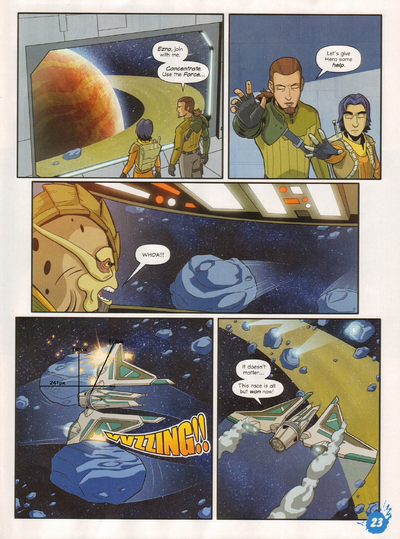 Not really sure on what to do with the speed component.

Though I have something of a rough idea

We can tell from the panel the ship and asteroids are traveling at about the same speed, but in exactly opposite directions.

I don't really feel like calculating an orbital velocity, especially since I don't even know how far into the orbital ring the race takes place, but I'll do a range of 3,887.4 m/s (about the orbital speed of GPS and absurdly low end given the orbital ring doesn't appear to extend that far above the planet) to 7,777 m/s (ISS orbital speed) for fairly conservative placeholders for now.

Right, there were 2 asteroids though, so 135.67 kilotons and 542.984 kilotons respectively combined

Seeing as this is season 1 Ezra though? Who's displayed only tenuous control of his potential power with his minimal training?

This was probably mostly Kanan

I suppose it would make more sense how Kanan isn't outright wrecked by the Grand Inquisitor, someone just shy of Ventress' level of power per word of god, going off a feat like this at any rate

Retrieved from "https://vsbattles.fandom.com/wiki/User_blog:Lina_Shields/STAR_WARS_REBELS:_Kanan_and_Ezra_throw_some_asteroids?oldid=842054"
Community content is available under CC-BY-SA unless otherwise noted.