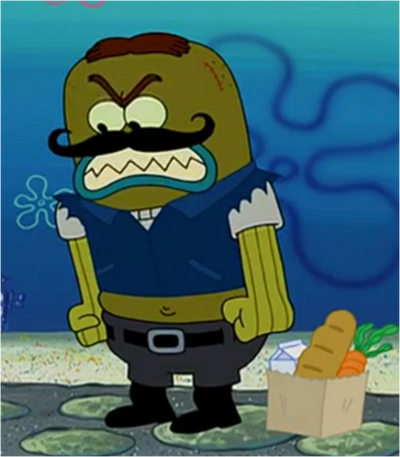 The Tattletale Strangler is the main antagonist of the SpongeBob SquarePants episode, "SpongeBob Meets the Strangler". He is a notorious individual, as even the bravest and toughest fish fear him. He is a pure criminal who has no respect for police officers and will stop at nothing to break the law. He has an irreverent, despicable, and irresponsible attitude, as he rats on his victims for reporting him to the authorities, when they completely have a reason to.

Attack Potency: Varies from Below Average usually to Wall level at his peak (Intimidated Squidward and Mr. Krabs. Has been stated to strangle anybody who tried to turn him in. Crashed through the wall of SpongeBob's house)

Lifting Strength:  Below Average (Could effortlessly lift up SpongeBob and Patrick)

Striking Strength: Varies from Below Average Class usually to Wall Class at his peak

Durability: Varies from Below Average usually to Wall level at his peak (Survived SpongeBob stabbing his eyeballs with cleats for six hours straight)

Stamina: High (Quickly escaped a police car before anybody noticed despite being under countless of handcuffs. Can dash to locations at quick speeds. Was completely fine after having his eyeballs stabbed for six hours straight)

Range: Dozens of centimeters (Is taller than SpongeBob, who is officially listed as 4 inches tall)

Intelligence: While The Strangler is knowledgeable on when he should and shouldn't strangle, and that he successfully tricked Patrick into thinking he was The Strangler, it is highly possible he was outsmarted by SpongeBob.

Weaknesses: Has an extremely short temper. He will not attack his enemies in public and will prefer to do it in a secluded area. In order to strangle someone, he will have to put on a "disguise" (which is just a fake mustache) and trick them into trusting him, which may not work on most people.

Retrieved from "https://vsbattles.fandom.com/wiki/User_blog:Insecurity97/The_Tattletale_Strangler_profile?oldid=3755707"
Community content is available under CC-BY-SA unless otherwise noted.