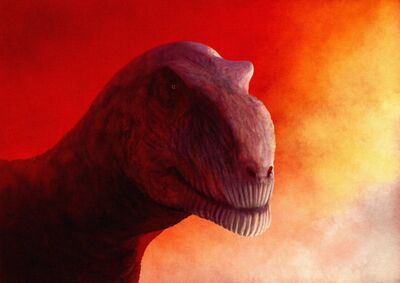 Even scientist can enjoy pop culture, which seems to be the reason why this abelisaurid carnotaurini theropod, is named after Thanos himself! Due to the fact the only part of the animal that had been found is a single vertebra, most of the dimensions of the creature are a bit unknown. This hasn't stopped estimates from being made though. 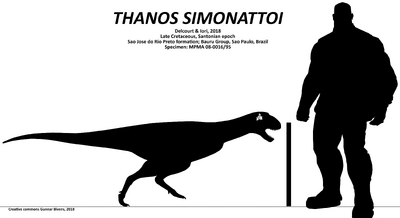 I only am making this part of the blog becaus I couldn't find any calculations to its size in any sources. Now it is pretty much everywhere.

Possibly comparable to other abelisaurid dinosaurs of similar size. (1,543 lbs or 700 kg (Which is smaller, but from the same family)-2,400 lb or 1,100 kilograms), possibly higher or lower (Trying my best here). (EDIT: This stuff seemed wrong and it doesn't fit what I talk about below.)

But as you can see, the name doesn't suit the animal attached to it, for it is only a medium sized dinosaur. Still, glad such an amazing raptor wasn't wasted on something like a raptor or something.

Much like most predatory dinosaurs, Thanos likely had some for of Enhanced Senses. Since we don't have the skull or brain cavity, we are going to be comparing it to other members of its group/its relatives.

Science Direct.com - Cretaceous Research/Neuroanatomy of the abelisaurid theropod Viavenator: The most complete reconstruction of a cranial endocast and inner ear for a South American representative of the clade

Enhanced Hearing iiuc, though I could be wrong.

Speed, again, is a tad hard to find seeing as they don't have much info on the animal, though it can likely roughly scale to other abelisaurids.

According to Wikipedia, it falls in the subfamily Carnotaurinae + Brachyrostra with some of the "close" members being:

That aside, many of Thanos' relatives to use their powerful legs for speed, so it isn't unreasonable to assume Thanos has speed comparable to his relatives like Carnotaurus (Though likely not as quick).

I will be using this Spino's blog as a reference to set this up.

Do to Thanos missing a lot of stats (Along with most of the animals he would scale too) I will try a few calcs (Which I have never been good at). Stick with me on this:

Lets start with the highest possible, the calculation it will definitely not be.

This however, is a large over estimate. Next I am going to do the lowest estimate.

While I don't have the weight for Ol' Thanos, if these calcs are correct he is clearly somewhere in the Wall level/9-B tier (Like most dinos)!

EDIT: The low-end A.K.A. Calc 2 estimate was accepted (check Therefir's evaluation in the comments). This would make Thanos' strength 88,888.9 J. For reference (from the Reference for Common Feats blog), this is more than enough to snap necks, spines, bones, but still not his fingers. Note, though I am not very good at math, I am pretty sure this isn't enough to crush a skull.