The Flamethrower Ultra-Robot easily destroys three buildings in a row before unleashing an attack that destroys multiple buildings at once. 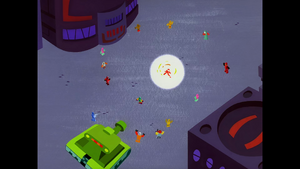 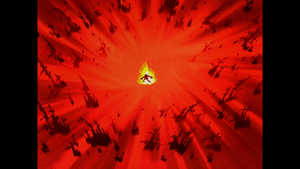 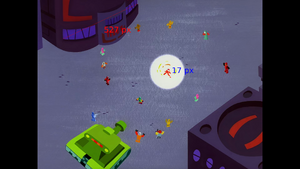 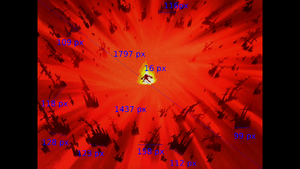 If we based buildings size from only the second picture's 16px, they would be 3-5 m wide.

At least 8-A Multi-City Block Level

If we take into account that the attack also blew everything away, the result would again increase.

I made GIF where I highlighted feat specially for You :

Looks like Jack traveled roughly the same distance as light. Let's find out the exact ratio between Jack's and sunlight's speeds. A little bit of Paint will help us with the ratio.

So, when I connect these 2 pictures, I get this one.

Let's get our ratio.

The calc itself has been done with a result of 80% the speed of light and accepted. This is kinda calc scaling, but there's another aspect of this that we can add; relativistic kinetic energy. The average weight of a Japanese man is 67.6kg.

Putting that through the RKE calculator and we get 4.044E+18 joules or 966.539196941 megatons. Seeing as though he's wielding a giant golden gauntlet bigger than himself, this would certainly be higher.

I did a calc of this feat involving the Gauntlet awhile back to celebrate Season 5. Here's a do-over.

Assuming Jack is 1.7 Meters, that would give the gauntlet a diameter of about 1.08 Meters and a length of 0.9 Meters.

It's not completely solid, so I'll use 80% hollowness.

Retrieved from "https://vsbattles.fandom.com/wiki/User_blog:Firestorm808/Samurai_Jack_Feats_List?oldid=5763465"
Community content is available under CC-BY-SA unless otherwise noted.