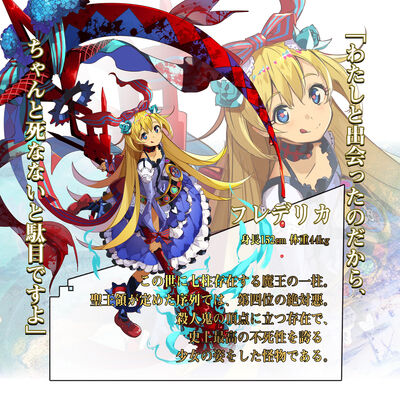 Frederica is one of the 7 Demon Kings present in Ahura Mazda, the First Heaven under the management of Mithra's Cosmic Law, Dualistic Avesta of Good and Evil. Holding the rank of 4th amongst the 7, she presides over the Garden of Slaughter Baliga and rules the race known as the Man-Murdering Demon as their Mistress

Holding the nickname of Princess of Slaughter, she's an immortal little girl who reigns as the epitome of man killers. She is a demon child, born as a Demon King while both of her parents were renowned Ashavan, a true monster whose self and killing intent had a awakened since the time she was a fetus. She killed and devoured her own mother, and even today, she lives as a Man-Murdering Demon while using her family home as her headquarters. Despite being the youngest Demon King, her pace at accumulating misdeeds is terrific, the damage she's dealt to Ashavan worlds in just a matter of a few decades ranks 3rd, next to the damage occassionated by Khvarenah and Bahlavan. When taking it all into account, she's ranked 4th amongst the Demon Kings, but in terms of mere kill count she's managed to annihilate multiple human societies.

Tier: At least 5-A, likely 4-C with Deathscythe. Possibly far higher. High 1-A through Power of Ego

Origin: Avesta of Black and White

Powers and Abilities: Superhuman Physical Characteristics, Immortality (Types 1, 2, 3, 8. All Man-Murdering Demons are inherently immortal for no explained reason other than they simply are. Her Commandment gave her the boon of immortality that's better than any other form of immortalities throughout the history of the Throne) Regeneration (at least Mid-Godly; her immortality is stated to be the best throughout all known eras, making it even superior than the boons granted by Valhalla's Blessing or Habaki's absurd craving to stay alive), Creation (Can create new powers for herself through Palangineh), Reality Warping (Can utilizes the Power of Ego to directly alter the very world itself to the user's liking, ignoring things such as the laws of physics, the very concept of space and time, causality or an extant, pre-established law), Regeneration Negation (At least up to High-Mid; Power of Ego can be used to kill a Man-Murdering Demon), Teleportation Negation (Nullified the activation of Quinn's Sewatir), Resistance to Matter Manipulation (Can resist and delay the effect of Kaikhosru's Dragon Breath empowered by his Power of Ego while being inside his domain where his Edicts are absolute), Sealing (Can break the Law of Separation that binds Baliga out of the universe if she chose to do so)

Attack Potency: At least Large Planet level (Is much stronger than Munsarat whose power can affect the entirety of Zahhak, a planet as big as Saturn, with mere activation), likely Star level with Deathscythe (is capable of bisecting a star in a single casual blow). Possibly far higher (Frederica had been rather casuals in all her known showings. Masada ranked the 7 Demon Kings in Avesta to be in the same place as the Yatsukahagi from Kajiri Kamui Kagura in term of powerlevel). High Outerverse level through Power of Ego (At a certain level, Power of Ego can directly alter the working of Commandment, which work off of Mithra's Cosmic Law, to a certain degree.)

Speed: At least Massively Hypersonic+ in base (treat an attack which moved at literal lightning speed as nothing), likely far higher (is capable of having a full fight with her fellow Demon King some tens of thousand of times in the span of several seconds). Possibly scales to FTL to MFTL feat (all the Demon Kings, especially the ones who are Star Spirits, are implied to be capable of interstellar if not intergalactic travel). Infinite attack speed through Deathscythe and Palangineh (Frederica's Deathscythe is capable of ignoring the distance between Frederica and her enemies alongside their size altogether. Frederica is able to bestow upon herself various kind of powers that ignores distance with Palangineh). Immeasurable through sheer force of will (Frederica can transcend the very concept of space-time entirely via Power of Ego if she felt like it).

Durability: Human level (Quinn noted that punching Frederica felt as if she was punching an average Ashavan). Regeneration makes her hard to harm, let alone kill

Range: At least Planetary (her power is superior to those of Munsarat whos capable of affecting an entire planet). Universal through various means (Frederica has various mean to ignore the concept of distance, even going as far as transcending space-time itself if she feels so inclined)

Standard Equipment: A Deathscythe, weapon which symbolizes her very being. When used by an Ashavan under the effect of her Palangineh, it was a weapon akin to another dimension, akin to a Daeva unto itself, with dimension distorting power and immense depth of history and murder on it, much like an Ahnenerbe from the era of Omewa Ewigkeit. On Frederica's hand, it can ignore the distance between her and their opponent and their size entirely.

Intelligence: Unknown to be exact. As a Man-Murdering Demon, Frederica's experiece for combat is practically nonexistent. As a race, Man-Murdering Demon don't concern themselves with specialized weapons (though exception exist, as in the case of Frederica and Munsarat), nor do they practice any form of martial arts. They do not possess even the idea of polishing their killing methods. To a Man-Murdering Demon, manslaughter is like breathing. It's a way of life, even natural. It's akin to why fish don't need to ponder about the way to swim. They don't recognize the necessity of killing methods nor of machines. They would rather use a mundane, common object just about anybody can find in their everyday life. For example, tablewares such as spoon or a simple plate. The moment they clasp it no matter what it is, it becomes a peerless tool of murder. A typical Man-Murdering Demon can casually shaves space away with nothing but a normal spoon, and Frederica stands atop the Man-Murdering Demon as their leader, her capability of murder matched by none.

Weaknesses: She can't avoid any attacks directed at her due to her Commandment. A glass cannon with a really low durability compared to her attack potency, although her absurd regen practically render this particular weakness relatively irrelevant

Commandment: A form of limitations whose contents are defined by those who impose it upon themselves. Commandment grants massive boons, usually an inversion of their limitations, if they're followed through. It's possible for an individual to possesses more than one Commandment. If someone were to break their Commandment, divine punishment shall falls upon them and they'll die in best case scenario. There are said to be punishment far worse than death for breaking a Commandment, but much of its details are unknown.

Palangineh, Hollow Clothing Commandment: A special kind of Commandment, capable of being used then thrown away, akin to a consumable good or daily clothing, provided the conditions and time period have been limited in advance. For example, in exchange for establishing the binding of "I won't speak for 3 days", the user will get "Telepathic powers restricted to 3 days", then speaking from the 4th day onwards won't violate the Commandment. Through the free use of this ability, mighty power can be infinitely replaced. However, Palangineh shouldn't exist beyond the realm of theory, as it isn't common,or even possible, for people to discard their own beliefs and/or convictions in such a frivolous form. Man Murdering Demons are the only exception, as they are an inherently empty existence.

Retrieved from "https://vsbattles.fandom.com/wiki/User_blog:EMS-TC02_Phantom/Character_Draft_-_Avesta_of_Black_and_White_-_Frederica?oldid=6287728"
Community content is available under CC-BY-SA unless otherwise noted.