In the most recent manga chapter (chaper 39) of Kumo desu ga Kumoko's Mother decided to leave the great labyrinth.

And since she is too big to use the normal passages she simply makes a new one. 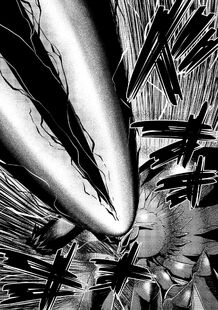 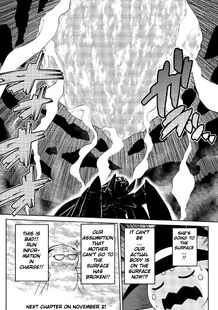 Doesn't seem too impressive for a being that can blow up moutains? That's because Kumo desu ga easily tricks ones sense of scale!

You see, when she made that hole Mother was in the bottom layer of the Great Elroe Labyrinth:

And the bottom layer is veeeery deep underground. The middle layer alone has things like 200m deep lava pools and 1 meter tall monsters are small in the Labyrinth.

However, we can get a better idea of how deep it is. That is because we have a map of the Labyrinth and a statement regarding the maps area: 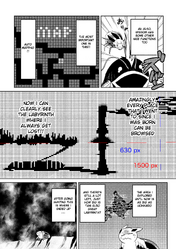 The map in the middle shows exactly the area Kumoko has traversed in her time in the labyrinth. That much we can confirm simply by following the stories plot. The map itself is generated via a high level skill, so we also know that in-universe it is supposed to be accurate.

As she states this area is as big as Hokkaido, Japans 2nd largest island. This is something that doesn't just appear in the manga, but is also mentioned in the novel at multiple points.

Next we need to figure out the width of the hole.

The perspective doesn't allow us any good scaling, but since Mother leaves through it its diameter should be larger than Mothers. So we will scale her.

For that I will use the scaling I have already done in this calc.

So the hole mother produced should be at least 26.93m in diameter.

However, there are clearly caves in that stone which we need to subtract. Since these are natural caves I will assume 20% hollowness.

Now for the destruction method. We see smoke or dust after the beam and otherwise nothing remaining. Since we have seen Mothers beam attack vaporize stuff before I will assume it's vaporization.

The epitome of consistency!

Retrieved from "https://vsbattles.fandom.com/wiki/User_blog:DontTalkDT/The_Queen_Taratect_finds_a_way_out_-_So_I%27m_a_Spider,_So_What%3F_calc?oldid=5418798"
Community content is available under CC-BY-SA unless otherwise noted.