I'm going to calculate one of the best feats shown by the lowest-ranking characters in the series during Part I. In the battle between Choji and Jirobo, Choji uses his Cho Baika no Jutsu that allows him to multiply his size to increase his weight and throw himself over the opponent and crush him, his body becomes really giant enough to destroy a considerable part of a forest.

It was difficult to think of a way to calculate it because of how the feat is shown, but after analyzing it I found a way. Taking into account the size of the ninja band of Choji in its normal mode and then in its giant mode it can be found with a precise number of how many times its size multiplied finding its new height and weight.

The size of the ninja band in its normal state is the basis of all this calculation. 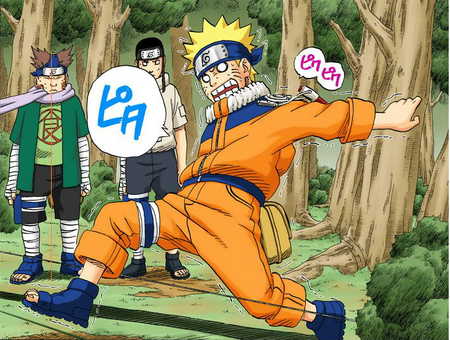 Size of the giant band

In the scene where the feat happens a pine is shown with which the new size of the band can be calculated, I thought about using the average dimensions of this type of trees (around 1.20 m to 2.65 m diameter of trunk) but I will use a more precise method calculating the width of a trunk of these trees around. 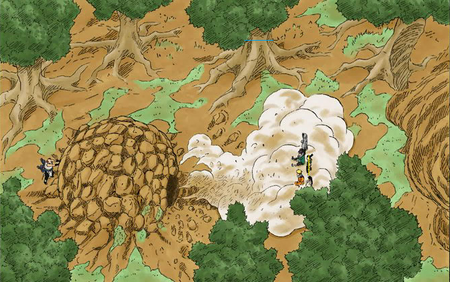 Now the size that happened to have the band: 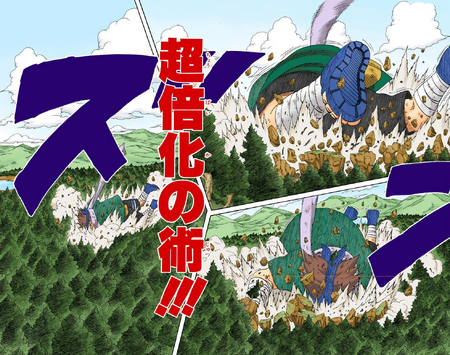 Well considering this, you can calculate the height and new mass of giant Choji obtaining the ratio that increased its ninja band from its normal state to the giant.

The ninja band increased 561 times its size, so that the new height of Choji can be obtained by multiplying that ratio by its normal height. This will help us to calculate the energy released by Choji as he lets himself fall.

Choji became really big, but his mass became much bigger. According to the square-cube law the mass is proportional to the cube of its multiplied, 561 al cubo es igual a 1.76558481e+8:

Now the energy released to the Choji will impact and destroy the forest area. The length is the height of giant Choji that we calculated before. Calculate the depth and width destroyed from the previous image.

As a rectangular cuboid its volume is length by width by height.

The destruction caused is clearly fragmentation, whose value is 8 j/cc

There is a considerable amount of characters that receive scaling of both characters.

The first thing in lifting strength are not many characters, Giant Choji and Jirobo Cursed Seal Version 2 would be Class G in Lifting Strenght. Choji's father's shack probably is too. The Gedo Mazo who is stronger than both in more powerful versions than the one mentioned in this blog as well. Juugo would receive scaling as Jirobo's power was a copy of his. Probably the Sage Mode users would also receive powerscaling from this ([they already have a prior calculation that cites them as such]).

The first, Jirobo mentioned that in his Cursed Seal Version 2 was 10 times stronger than in his version 1 (the same was said about Sakon and Ukon too), so Jirobo Cursed Seal Version 1 would be like Small Town Level, in its base state it would be like Multi City Block Level+. Choji mentioned that in his Butterfly Choji Mode he was 100 times stronger than Giant Choji so in that state his power is between Large Town Level+ and Small City Level.

— Now the important thing. Jirobo is mentioned several times as the weakest member of the Sound Four, so his teammates Tayuya, Kidomaru, Sakon and Ukon would receive powerscaling from him. In the three versions mentioned above by me with their respective level. Sakon and Ukon are de most strongest of Sound Four, followed by Tayuya.

— Neji, Shikamaru and Kiba would receive powerscaling when facing them and give them a difficult battle, with Neji coming to defeat one of them in extreme difficulty.

— Temari and Kankuro easily defeated two of them so they would also receive scaling.

— Kimimaro Base in his healthy state was able to defeat the Four Sound easily, although these were in his Cursed Seal Version 1, obviously Kimimaro is much stronger than any of them.

— Rock Lee just recovered was able to fight Kimimaro Base and force him to use his Cursed Seal Version 1, he would receive powerscaling from Kimimaro then`.

— Gaara forced Kimimaro to use his Cursead Seal Version 2 and took it to the limit, although it was a weaker Kimimaro that in its best state was incredibly superior to any of the Four Sound yet. Anyway this Gaara already has feats of this level or higher, so it would not change much.

— Most of Akatsuki and Kages receive powerscaling by being stronger than all those mentioned above (with some exceptions).

— Naruto and Sasuke in the different states they used in their battle during that part of the series likewise receive powerscaling from their teammates.

— Kakashi, Asuma, Kurenai and Guy receive powerscaling by being stronger than the Sound Four who had problems with two Tokubetsu Jonin (an intermediate range between Chunin and Jonin) even using their Cursed Seal version 2; the mentioned Jonin would be more powerful even in base state than those two Tokubetsu Jonin and therefore more powerful than the Four Sound. The Four Sound were also afraid to face Kakashi.

— Zabuza and Kabuto would also receive powerscaling from Kakashi: Zabuza confronted him on an equal footing and took him to the limit on both occasions, Kabuto is mentioned by Jiraiya, Orochimaru as someone from Kakashi's level, who also said the same thing.

— The Sannin also receive powerscaling of all this.

Other characters would also receive powerscaling (honestly I do not have them in mind) but I will expand this section if this is accepted.

Retrieved from "https://vsbattles.fandom.com/wiki/User_blog:Dariel_Senju/Choji%27s_Cho_Baika_no_Jutsu_Calc?oldid=1776016"
Community content is available under CC-BY-SA unless otherwise noted.