VS Battles Wiki
Register
Don't have an account?
Sign In
Advertisement
in: Tier 9, Tier 9-B, Characters,
and 49 more

Siren Head is a hostile character/species that tends to inhabit forests and wooded areas. It is mainly known for its tall lanky body and its ability to mimic voices. It is likely the most popular character from the Trevor Henderson Mythos.

Age: At least 44,000 (Comparable to cave paintings, as it appears in them)

Powers and Abilities: Superhuman Physical Characteristics, Large Size (Type 0; It is 40 feet or 12.192 meters tall), Partial Cyborgization, Enhanced Senses (Can seemingly see even though it lacks a head or eyes), Sound Manipulation (Can mimic voices. Is implied that it killed some of its victims via blasting their ear drums), Photographic Memory (Can memorize any sound or voice after hearing it only once and perfectly mimic it from that point on without ever forgetting it), Stealth Mastery (Siren Head often uses this ability along with his camoflauge to ambush and kill prey. He also moves almost completely silently. One example of Siren Head's stealth), Berserk Mode, Camouflage (Appearance has been mistaken for trees, and its main form of hiding is using its similar appearance as other objects like telephone poles and lamp posts), Immortality (Type 1, possibly 6), Surface Scaling (Can cling to ceilings and walls), Light Manipulation (Can have a head similar in look and function to that of lamp posts), minor Perception Manipulation (Its teeth are only visible with certain radio frequencies), Body Control (Can contort its body and remove its head), possibly Aura (Most of the monsters have this ability, and could just cause bad luck all the way up to breaking reality and other ailments), Technology Manipulation (Can seemingly cause minor camera distortion), Adaptation (Appearance can change quickly to help it hide in new environments), Shapeshifting (Was able to copy the appearance of home furnishings and pipes), Duplication/Corruption (Type 1; Possibly can use its siren to morph human remains into mummified corpses, and then used to spread the species), Extrasensory Perception (Can possibly "see" using echolocation), Dimensional Travel (Could have traveled from another dimension), Resistance to Technology Manipulation (Would be barely effected by an EMP)

Attack Potency: Wall level (Its kinetic energy is 615.502 kj. Can smash through trees), ignores conventional durability with some abilities

Speed: Subsonic (Could potentially keep up with a speeding car, with most cars top speed being 120 mph or 53.6448 m/s)

Lifting Strength: Superhuman (Can kidnap an entire United States family of four at once. This was likely an adult male and female, the average weights being 88.8 kg/195.8 lb and 76.4 kg/168.4 lb respectively, and two kids, which could weigh from 26 to 134 lbs each, which would be in this range)

Stamina: High (Can stand in the same spot without eating or moving for days)

Range: Several meters physically (Arms are the length of its body, which is 40 feet or 12.192 meters), higher with abilities

Intelligence: Unknown, likely Above Average (While it is stated to be a predator, its intelligence is very human, as it uses its voice to trick and lure in victims, stalking victims. It shows the ability to plan. Very skilled in stealth and camouflage. Siren Head also seems to have a language it shares with others of its kind. Can permanently memorize any voice or sound after hearing it only once)

Standard Tactics: Siren Head's tactic depends on its situation. If in a location were its potential prey doesn't see it, the monster will go into hiding and wait for the opponent to get near to it. It will also use its vocal mimicry to lure a target to it. It has been known to stand still for days, waiting for prey to come its way. When hungry enough, it will use "every tactical advantage" to get its prey. This includes mimicking objects within an area or adapting to the area. When directly seen by an opponent however, it will rush at them seemingly enrage or in a state of bloodlust. 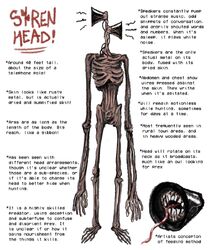 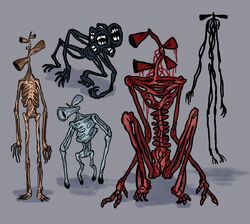 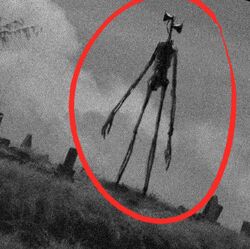 I've found something. A scrapbook, of sorts. Someone was tracking monsters. They've compiled a lot of previously unknown information on what appears to be a variety of...entities. And i'm making copies. Stay tuned. Next month. 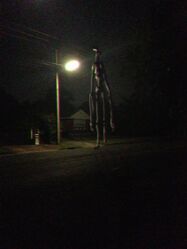 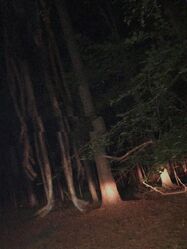 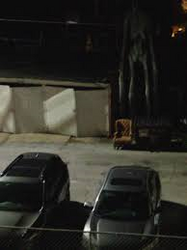 "-visitors to the motel that night dismissed the item as a piece of "grotesque statue art", according to "Goodnight Inn" manager Ann Garnicke, not knowing it's appearance preceded a grim-" 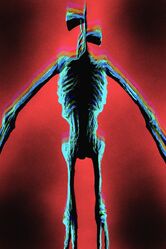 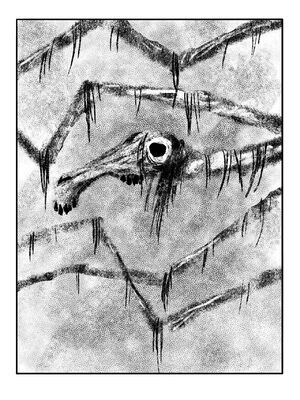 Long Horse, also called Dream Horse is a benevolent entity that warns of and foretells incoming disasters. Its appearance is similar to that of a horse, and it has a neck with infinite length.

Age: At least 44,000, likely older (Comparable to cave paintings, as it appears in them)

Powers and Abilities: Teleportation (Can "pop into existence"), Elasticity, Body Control (Can create new neck joints at will), Dream Manipulation (Frequently appears in dreams), Dimensional Travel (Moves through the layers of reality. Could have traveled from another dimension), Telepathy (Can talk without words), Probability Manipulation or Precognition (Either tries to warn humans of incoming disasters or accidently causes them. The longer it appears to someone, the more misfortune will occur), Enhanced Senses (Similar to that of horses, which includes increased hearing and smell), limited Gravity and Physics Manipulation (Its neck breaks both gravity and physics), Immortality (Types 1 and 2; Is unharmed by its body fluctuating between existence and nonexistence or being in another dimension, as well as its neck withering and crumbling to dust), possibly Aura (Most of the monsters have this ability, and could just cause bad luck all the way up to breaking reality and other ailments), Large Size (Type 8)

Attack Potency: Unknown, possibly High Universe level (Due to being infinite size, it would generate this much power from moving alone)

Speed: Unknown (it's impossible to determine his speed because he can just move directly in space)

Intelligence: Average (Can communicate with humans)