What is Super Robot Wars?

I promised to certain admin I would come back again

The Powersacling chain is based on the Story Mode and what is showed there. Game Mechanics and Plot-Induced Stupidity are highly avoided.

Story wise, Mechagodzilla Eva-01 Type was created through the combined efforts of NERV and the JSDF to combat Godzilla. Despite the combined might of Mazinger Z, the EVAs and the MechaGodzillas, Godzilla is still alive and lives to fight another day.

Story Wise, the Machine Beast Corps from Dr. Hell and Baron Asura are triying to capture Godzilla, so he teams up with Mazinger Z, Kiryu, Shining Gundam and Gaogaigar.

Story Wise, Sei and Reiji find themselves piloting the Strike Build Gundam and joining the Gurren Lagann crew in their battle with the Anti-Spiral. This is possible due to them being in spiral space. The Anti-Spiral sends traps Sei and Iori in the Infinite Multiverse Labyrinth where they encounter various Gundam characters from across the franchise.

Eventually, Sei and Reiji are able to break free from the Labyrinth (At that time Tengen Toppa Gurren Lagann had absorbed the Infinite Multiverse Labyrinth entirely, which is a is a multiverse with infinite parallel universes), and through the power of imagination, they are able to summon all major Gundam protagonists in the game to help fight and defeat the Anti-Spiral.

Despite the combined might of Mazinger Z equiped with the Jet Scrander, the EVA units Zero, 01, 02, 03, two Mechagodzilla units, Hein Helm Olive and the machine beast corps. Godzilla was pretty much close to stomping them. Extremely consistently showed that these Mechas including Mazinger Z are comparable to all major Gundam protagonists in the game like Shining Gundam, Full Armor Unicorn Gundam, God Gundam, etc, who aided Tengen Toppa Gurren Lagann in his battle with Granzeboma. At that time Tengen Toppa Gurren Lagann had absorbed the Infinite Multiverse Labyrinth entirely, which is a is a multiverse with infinite parallel universes.

Scaling chain explained with one picture: 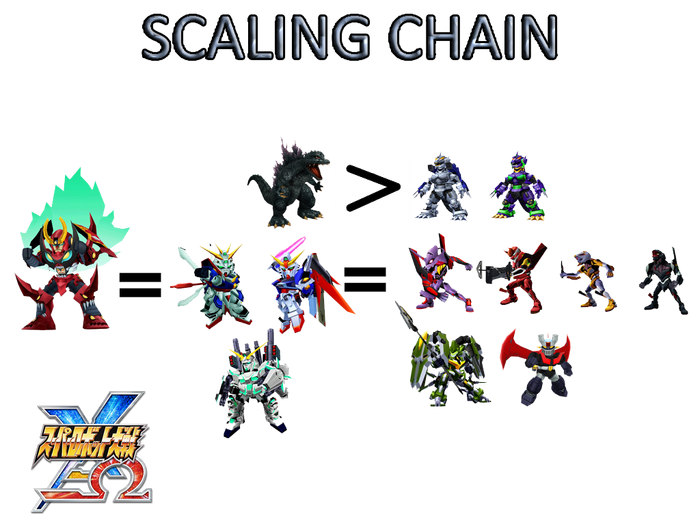 And Godzilla scales from:

Retrieved from "https://vsbattles.fandom.com/wiki/User_blog:Apex_PredatorX/Super_Robot_Wars_X-%CE%A9?oldid=6163780"
Community content is available under CC-BY-SA unless otherwise noted.