Well, Wrath Of Itachi was now the one who asked about this calculation, so yeah.

Also, if raiton is real lightning or whatever you want to ask, go to ask him. I haven't read all the manga to know stuff. 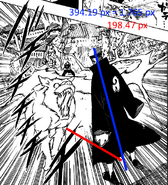 I will sustract the average skull length of a dog, as the distance calculated is from Pain to the dog legs, so at least the skull length shouldn't be counted.

Now, if you ask why I'm not using angsizing, the result isn't a correct one as the perspective of it is too funny look like for it to work properly. I personally believe this is the best way to calculate this feat, or probably the only way, because I tried all kind of ways and nothing seems real aside of this one. I think is the pixelscaling results should be close to the real distance looking at the size of Pain's face and body, and the next page as the attack shouldn't be much far away of the distance used in the calc.

But it's understandable if this calc doesn't get accepted as the pixelscaling itself is too iffy look like.

But of course, there is always a way to do stuff assuming low, mid and high ends.

I'm not fan of doing this I feel dirty as I belive only in mid ends, but those three distances are easily between Pain and the dog, so they can be used I guess.

Retrieved from "https://vsbattles.fandom.com/wiki/User_blog:AlexSoloVaAlFuturo/Naruto_-_Bad_Dog?oldid=4370188"
Community content is available under CC-BY-SA unless otherwise noted.