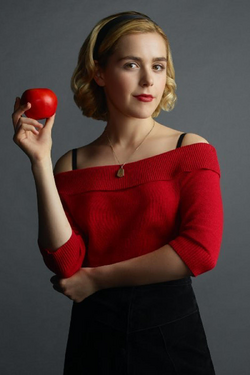 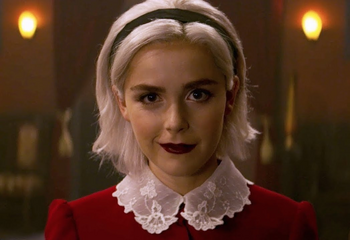 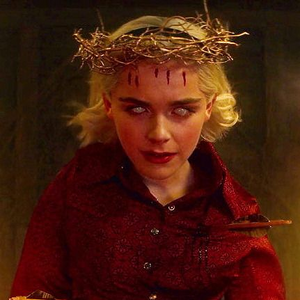 Sabrina Edwina Diana Spellman is the main protagonist of the Netflix series "Chilling Adventures of Sabrina". She is a part-mortal, part witch born to Edward and Diana Spellman. Due to her nature as a half-witch, half-mortal, she is torn between her life as a regular teenage girl, and her life in the world of witches. And despite not being a full witch, she is noted to have the potential to become the most powerful witch of her generation.

Magic, Limited Telekinesis, Memory Manipulation, Limited Dream Scying (Receives visions and warnings of the future/past, but they don't come to her willingly and are often hard for her to understand), Animal Manipulation (Can call upon and control spiders), Summoning (Can summon her familiar, demons, and other witches), Perception Manipulation, Limited Purification (Type 2; can exorcise demons), Can provide blessings to others (Can cast protection spells on other, and give them exceptional basketball and singing skills), Empathic Manipulation (Can use magic to make others feel better, and give them courage), Limited Astral Projection, Limited Necromancy (Brought Tommy Kinkle back to life, but not with his soul)

Resistance to Madness Manipulation (Type 2; survived the first night of the Harrowing relatively unscathed, which was stated to have previously driven many other witches to madness)

All previous abilities, Longevity (All witches age slowly, and are able to live for hundreds of years), Soul Manipulation via Fire Manipulation (Can burn souls), Teleportation, Cloth Creation, Shapeshifting (Glamoured herself to appear as her father), Non-Physical Interaction (Is able to see and touch souls and ghosts), Illusion Creation (Created an illusion of the Dark Lord) Mind Manipulation, Telepathy, Transmutation (Can turn her Hellfire into water), Limited Time Travel (Can time travel using the time egg, and the unholy regalia), Limited Sleep Manipulation (Put an entire town to sleep, with the help of other witches), Limited Dimensional Travel, Sealing (Type 1)

All previous, Resistance to Mind Manipulation (Resisted mind control from the Dark Lord, which caused a regular person to do this)

All previous, but to a greater extent, Restricted flight, Resurrection (Brought herself back to life after being killed, and was able to bring those who have already been killed back to life), Regeneration (Low-Mid; completely healed herself after being fatally wounded by several arrows), Weather Manipulation (Was able to instantly change the weather from rainfall to sunshine), Healing (Completely healed a fatally wounded Ambrose, who was on the verge of death), Purification (Type 2; can banish demons)

All previous, but to a greater extent, Resistance to Power Nullification (Despite wearing a crown that had previously prevented her from doing so, she was still able to use magic), Regeneration Negation (Low-Mid; healed Ambrose, who had a cursed wound which couldn't be initially healed)

All abilities in her pre and post-dark baptism keys, but slightly weaker, and without Hellfire, Light Manipulation (Created enough light to defeat The Darkness), Limited Sealing (Type 2), Void Manipulation (Can send people into The Void)

All resistances in her pre and post-dark baptism keys, but slightly weaker, Reality Warping (Was unaffected by Blackwood warping reality)

Stamina: Above Average (Survived ‘The Harrowing’, where she was made to stand still in the middle of the cold night until morning, with no shoes and her body exposed, and unable to turn or make any significant movement, as she was repeatedly tormented with the sounds of her loved ones being tortured or brutally killed. Survived having most of the water in her body being rapidly drained. Survived having her brain infected with every disease known to human and witch-kind.)

Range: Several meters with abilities like telekinesis and hellfire (Usually fights within eyesight of her opponents, but doesn’t need to physically touch them); Kilometers (Most of her spells don’t need to travel, and can be cast from anywhere within Greendale, and just spawn on the opponent); Inter-dimensional with Dimensional Travel.

Intelligence: Average (She is somewhat knowledgable on magical spells and can be quite resourceful in times of need, but otherwise, she is just a regular high school teenager)

Weaknesses: A large majority of her abilities are activated by spells that she has to chant, which may give an opponent the chance to attack her before she could finish casting. Furthermore, some of her powers don't have instantaneous effects, making them useless in decisive combat. Most of her abilities also require some level of prep and/or assistance. | Same as before. | None Notable | Same as her Pre-Dark Baptism key 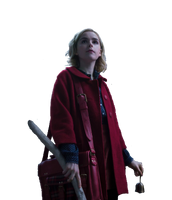 Sabrina at the beginning of the series

Sabrina burns the Greendale 13 with Hellfire 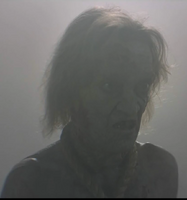 Sabrina as she appears in Roz's vision 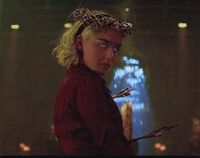 Sabrina as Herald of Hell