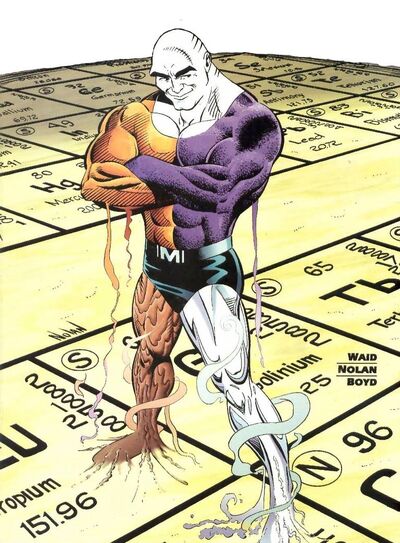 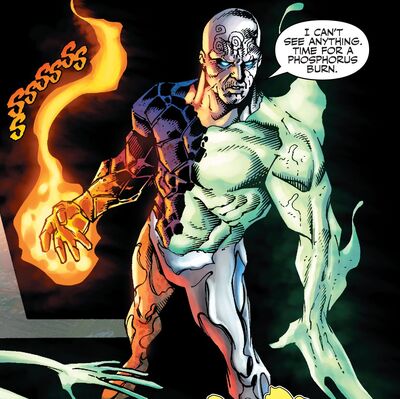 Rex Mason was a bold adventurer, globetrotter, and soldier of fortune, in the style of heroes who populated the pages of old pulp novels. One day, Mason was hired by billionaire Simon Stagg, the CEO of Stagg Industries, to find and bring back a rare and ancient Egyptian treasure known as the Orb of Ra. However, not long after contracting him for the job, Simon Stagg discovers that Mason has been dating his daughter, the bombshell beauty Sapphire Stagg. Because of Mason's rather large personality, Simon Stagg thought he would usurp his status as the most important person in his daughter's life, causing an irrational hatred for Mason. All of this resulted in an elaborate plot from Simon Stagg to eliminate Rex Mason for good.

While inside the Egyptian pyramid where the Orb of Ra is said to be residing, Mason is knocked unconscious by Simon Stagg's Neanderthal-like bodyguard named Java. Now trapped in the pyramid, he finds himself exposed to the energies of the radioactive meteorite from which the Orb of Ra was created from, known as the meteor of Ahk-Ton. The energy of the meteor changes him physically, and Mason soon finds out the he now has the power to shapeshift and change himself into any combination of elements found within the human body. He also discovers that he is practically invulnerable when he is in an inert and unmoving state. However, his face is now pasty white and disfigured, and the rest of his physical body becomes segmented, with each limb appearing to be entirely made of a different elemental substance.

Superhuman Physical Characteristics, Immortality (Type 1), Shapeshifting, Limited Self-Sustenance (Types: Limited 1 [Can survive being in the vacuum of space], 2, and 3, [Rex has no need for food and sleep.]), Elasticity, Elemental Manipulation (Air, Fire, Earth, and Water), Elemental Intangibility, Poison Manipulation via Shapeshift (When rampaging turns into a large flood of liquid and then a cloud of noxious gas.), Acid Manipulation via Shapeshift (Becomes a wave of hydrolic acid.), Biological Manipulation (Neutralizes acid., Sprays out a liquid that counteracts acid burns and acts as an anathetic to paralyze the person.), Light Manipulation (Turns his hand into a magnesium flare.), Body Control (Opens a hole in his chest to avoid a laster.), Limited Attack Reflection (Turns his hands into mirrors to reflect lasers.), Ice Manipulation (Freezes OMAC's arm.), Magma Manipulation (Shoots out lava from his hands to melt through the floor.), Elemental Invisibility (Can turn into an invisible gas to spy on enemies.), Limited Empathic Manipulation (Can release pheromones to calm people.), Flight, Regeneration (Likely Mid-High. Instantly recovers from complete vaporization.), Duplication (Makes 10 clones.), Size Manipulation (Can grow bigger than a building.), Enhanced Senses (Finds a bioweapon by tracing the elements in it.), Statistics Amplification (Can enhance his strength and durability by shapeshifting into various elements.), Resistance to Extreme Cold, Fire Manipulation (Unaffected by a flamethrower), Extreme Heat (Survives the heat of exiting the atmosphere), Electricity Manipulation (Takes an electric shock that takes out an OMAC), Magic (Biology his body allows him to resist magical temptation that even Hal Jordan couldn't.), Transmutation (Stops the process of being forcibly turned to gold), Radiation Manipulation (Becomes lead to protect Catwoman and Katana from radiation.), Physical and Energy Attacks (Can mix certain elements such as Titanium to resist the energies of the Dark Multiverse.)

Intelligence: Genius (Skilled to a degree in archaeology and investigation.)

Weaknesses: The Orb of Ra; The artifact that made him Metamorpho can also bend him to his will, making him a slave to whoever has it. Elemental generation requires lots of concentration.

Unique Physiology: Metamorpho's physical body appears segmented with each limb appearing to be entirely made of a different elemental substance; whether it is liquid, solid or gas.

Molecular Reconstruction: Stagg once boasted that Mason possessed the potential to submolecular variance at will, more than simply changing his own molecular/atomic structure at will but altering the very chemical nature of other objects even at a distance.

Metamorphosis: Metamorpho can also shape parts and portions of his body instead of the whole. He can form such complex shapes as a tank and a bicycle and such simple forms as a cloud or a spring.

Bio-Fission: After his absorption of Shift, Rex's powers developed so that he could create duplicates of himself from his body. They each can move and speak (although they do not seem to be able to perform Metamorpho's regular special abilities), and Rex typically reabsorbs them before engaging in combat (indicating further that Rex may not be able to use his other powers until he is whole again).