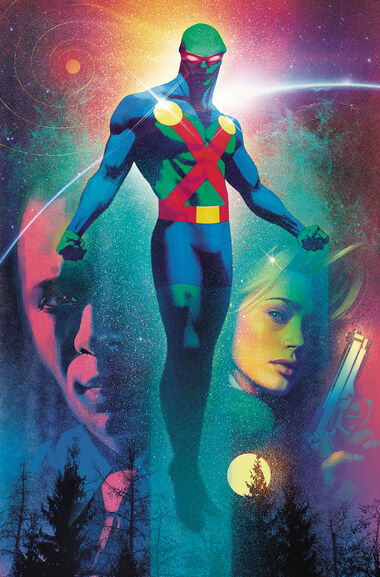 J'onn J'onzz is the Martian Manhunter, one of the last survivors of the planet Mars who came to Earth in search of justice and peace. Roughly one million years ago, Mars was a living world, populated by a race of humanoids divided by skin color.

However, one day the populace received a psychic warning, which the government perceived as a threat and recruited several of its people, including a young J'onn J'onzz to investigate. While on their mission, the government agent Ma'alefa'ak unveiled a double-cross, killing all of the subjects except J'onzz and then used their blood for a magic ritual that super-empowered J'onn - permanently, against his will.

Hunting Ma'alefa'ak, J'onn discovered a monster - the cause of the psychic warning that had sent him on the mission in the first place. Taking the shape of J'onn J'onzz's son, the monster explained that it was the embodiment of the dying Martian biosphere, trying to warn the populace to help it. However, the embodiment decreed that they were unworthy, and Mars and the Martians died, throwing J'onn to Earth, where he lost himself in an infinity of identities before finally, one million years later, he attempted to become a hero once again.

Resistance to Time Manipulation, Reality Warping, Mind Manipulation, Anti-Energy Attacks (Takes an anti-energy blast from Wildfire.[11]), Biological Manipulation/Disease Manipulation (Body can resist pathogenic mutagens.[12]), Ice Manipulation (Breaks free of his cells being told to freeze.[13]), Madness Manipulation (Enters Atrocitus's mind, feeling his rage and viewing his past.[14]), Temperature Manipulation/Magma Manipulation (Flies closer to the sun than any living beings been before according to Superman.[15] Survives heat and lava up-close that was burning Mera from far away.[16]), Corruption (Resists the totality reverting and mutating his mind.[17]), Pain Manipulation (Endures Mindhunter's mental assault and torture for hours.[18]), Poison Manipulation (Phases only an arm to avoid an attack and phases out his lungs to avoid breathing toxic spray.[19]), Statis Field (Walks through a status field.[20])

Intelligence: At least Genius (Vast knowledge of earth and alien races throughout the universe, decades of combat experience against all types of foes, accomplished detective, has read and processed the knowledge of every mind on earth multiple times.)

Weaknesses: Martians are much more vulnerable to fire than the average Earth human. At times this has been portrayed as physical, psychological, or a combination of the two. The effect of this is to strip any Martian of their powers as they involuntarily lose control of their body.

Invisibility: Martians can cause the biopolymers in their bodies to lose their ability to reflect light, making the Martians invisible to normal light and human sight.

Superhuman Strength: Martians possess vast levels of superhuman strength and are among the few races that are able to match Kryptonians in terms of raw strength. Martians can easily shatter reinforced concrete and steel, lift and carry hundreds of tons with ease and deliver incredible damage with their blows.

Martian Vision: Martian visual acuity greatly exceed human norms and allows for a wider range of information to be observed.

Telepathy: Martians have the ability to read the minds of others and project their thoughts to varying degrees. They can also project their mental essences into a gestalt community known as the "Great Mind". Through this, the community can enhance the telepathic strength of other Martians. This power can also enable them to reverse the effects of amnesia or psychological brainwashing.

Telekinesis: Martians have mind-over-matter abilities and can lift and move objects with their minds. They can also employ their telekinesis in offensive way by discharging telekinetic blasts capable of great concussive power.

Manhunter Augmentation: As a living weapon of the martian race, J'onn J'onzz grew into a few powers others of his species did not. Such as the ability to arsenalize his metamorphic biomass in more creative and unconventional ways.

Bio-Fusion: J'onn's shapeshifting abilities are so pronounced he could fuse himself into whatever substance he wished too. Turning a mechanical martian city sized battle suit into a new body with which he could pilot and operate.

Bio-Fission: He could even replicate himself to an almost indefinite degree, creating thousands if not millions of multi-colored cast off's of himself by force of will. J'onn can just as simply re-absorb his duplicates back into himself if needed.

Adaptation: What truly sets a Manhunter class Martian's metamorphosis apart from other Martian's is the spontaneous adjustment of their Sub-molecular physiology on the fly. Be it with or without conscious thought in order to overcome most any kind of threat.