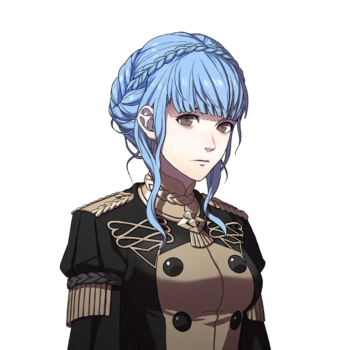 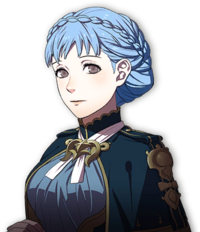 Marianne von Edmund is a character in Fire Emblem: Three Houses. She is a noble from the Leicester Alliance, and a student who attends the Officers Academy at Garreg Mach Monastery. She is very antisocial, and rarely interacts with others. Some people have never even heard her speak before. On the other hand, she loves animals, and often spends time talking to them. She is also very religious, and regularly prays to the goddess.

Later on, it is revealed that her low self-esteem was mostly due to her Crest, the Crest of the Beast, which was believed to cause great misfortune. In spite of this, she becomes much more confident over the course of the story, and learns to accept herself for who she is.

Superhuman Physical Characteristics, Weapon Mastery (While she mainly uses magic, she has a talent for using swords and lances), Magic, Elemental Manipulation(Of the Wind, Lightning, Ice, and Light variety), Healing (Can heal herself and others through multiple means), Damage Boost (Depending on the Magic or Combat Art, she can deal extra damage to certain types of enemies. Can also deal extra damage with her Crest), Statistics Amplification, Summoning (Can summon a battalion to help her in battle), Damage Reduction (Via Miracle), Limited Power Nullification (Via Silence), Resistance to Power Nullification (Via Unsealable Magic), Possibly Transformation (Maurice's Crest was able to corrupt him into becoming a Demonic Beast)

Same as before, Damage Boost (Via Beast Fang)

Attack Potency: At least Town level (Should be comparable to users of Meteor) | At least City Level+ , possibly far higher (Has a Heroes' Relic, which should be roughly half as strong as the Sword of the Creator. Assisted in the defeat of Maurice)

Weaknesses: She initally lacked confidence, and had low self-esteem, but this doesn't affect her as much Post-Timeskip. Her magic and gambits have limited uses per battle.

Here are some abilities that Pre-Timeskip Marianne has been shown to have:

Note: There is no key for Post-Timeskip Marianne here, since she never shows up as an enemy after the Timeskip in any route.

Here are some combat arts Marianne can perform:

Here are some magic spells Marianne can learn:

Crests (紋章 Monshō) are a game mechanic introduced in Fire Emblem: Three Houses. They serve as combat enhancements that empower the wielder of one special properties in battle. These can range from damage increase to attacks or reservation of spell usage. Crests are fixed to specific characters and cannot be removed. Their effects act as passive Skills that activate randomly, activating it more often if they have a Major crest or occasionally if it is a Minor crest. Marianne is confirmed to have only one Crest: 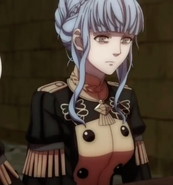 Retrieved from "https://vsbattles.fandom.com/wiki/User:Rtxthegamer/sandbox2?oldid=6039529"
Community content is available under CC-BY-SA unless otherwise noted.