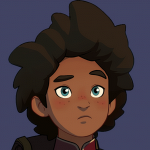 Hey, just something for people that wanna PM me, I'm KingEz on fanfiction.net, because apparently a lot of people use that for PMs when they're in this fandom.

Okay, let's do this one last time. My name is Ezran and I want to be a Content Mod or Chat Mod, but mostly Content Mod. For the last 12 years, I thought I was the one and only Fandom account. I'm pretty sure you know the rest. Most of my edits are minor, but I believe that minor edits make a big difference in the end.

Verses You'll mainly catch me on:

Verses I know of pretty well (in no particular order):

The King of Fighters

The Amazing World of Gumball

(Don't forget that I calc stuff too)

Pages I plan on making in the future

Retrieved from "https://vsbattles.fandom.com/wiki/User:KingEzran?oldid=5990073"
Community content is available under CC-BY-SA unless otherwise noted.