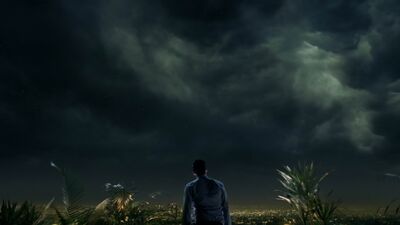 God is one of the two co-creators of the multiverse and the father of all angels along with his ex-wife the Goddess. He is the ruler of Heaven, and the creator of angels such as Manny and Imogen, as well as having created all forms of magic, a supernatural power that manipulates primordial energies to achieve incredible feats.

When his son Lucifer rebelled, God was so angry that he wanted to destroy Lucifer. Instead, by the Goddess' request, he cast Lucifer to Hell to punish the sinful dead mortals for eternity. Some time later, after the Goddess had repeatedly used her power to attack humans, God somehow defeated his wife and then stripped her of her immense power before banishing her to Hell and appointing Lucifer as her warden.

In Constantine, He sends the angel Manny to watch over and assist John Constantine in battling La Brujeria, a secret organization that serves the forces of Hell. He is also referenced and plays a pivotal part in Legends of Tomorrow Season 2, where they must prevent the Reverse Flash from obtaining the Spear of Destiny, which was endowed with the power to control the universe by the blood of Jesus Christ. In Lucifer, He is seemingly trying to have Lucifer redeem himself, as shown when he had Frank Lawrence cross paths with him.

Classification: Supreme Being, God, Celestial Being

Powers and Abilities: Superhuman Physical Characteristics, Energy Manipulation, Magic (Is the creator of all forms of Magic, which is the manipulation of primordial energies), Higher-Dimensional Existence, Large Size (Type 9), Reality Warping, Creation (Created the multiverse, Heavens, Hell, Earth, the archangels such as The First of the Fallen, millions of angels such as Manny and Imogen, Humanity, and all other beings in creation along with the Goddess, created an alternate universe where Lucifer and Chloe never met), Resurrection (Resurrected Lucifer after he was killed by Malcolm Graham), Light Manipulation & Holy Manipulation (His true form is "made" of pure divine light), Immortality (Types 1 and 5), Power Bestowal (Gave the Spear of Destiny the power to control reality), Teleportation, Time Manipulation, Spatial Manipulation, Matter Manipulation, Mind Manipulation, Soul Manipulation, Darkness Manipulation, Life and Death Manipulation, Healing, Biological Manipulation, Flight, Non-Corporeal, Existence Erasure (Gods can destroy the very essence of beings and eradicate them from existence), Healing, Power Nullification (Stripped the Goddess of her immense power before banishing her to Hell), Curse Manipulation (Cursed Cain to always be resurrected should he die, with even demon knives being unable to kill him despite the knives being able to kill angels, by ordering Amenadiel to mark him), Breaking the Fourth Wall (Directly spoke to the public in Once Upon A Time), Omnipresence, Omniscience

Weaknesses: The Flaming Sword and other Gods, like his ex-wife, can kill him.

Retrieved from "https://vsbattles.fandom.com/wiki/User:Ionliosite/Arrowverse?oldid=5672432"
Community content is available under CC-BY-SA unless otherwise noted.