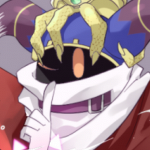 Salutations! Do please call me Mag.

I like a lot of things, varying to Cartoons to Games! Though, the three things I like to most compared to anything else would be Kirby, Ducktales, and The SCP Foundation.

I like Kirby because of its simple yet interesting characters and hidden lore, along with the many unique games the series has portrayed throughout my entire life.

I like Ducktales, wheather it be from the Uncle Scrooge comics to its Reboot, because I feel it's one of the most creative and likable Cartoon verses out there.

I like The SCP Foundation because of its SCPs, story, and overall creepy atmosphere. Oh, and SCP-049 too, explains why I made the page of him.

Other things I like are Left 4 Dead, Mario Bros, Terraria, Chowder, Regular Show, Super Smash Brothers, and overall much much more!

And if you couldn't tell... I'm a huge cartoon guy.

with Mario and Kirby)

Notable Verses I am neutral with

Notable Verses I am against

(By the by, the list below isn't exactly accurate within the order of when I created these pages. If those who are all wondering.. SCP-049 is the first page I've ever created.)

Names stated below are those who gave the page a major update, or just remastered/reconstructed it in general, I am willingly thankful for that, and for them!

Retrieved from "https://vsbattles.fandom.com/wiki/User:EMagoIorSouI?oldid=6533595"
Community content is available under CC-BY-SA unless otherwise noted.