VS Battles Wiki
Register
Don't have an account?
Sign In
in: Characters, Medaka Box, Gainax,
and 73 more 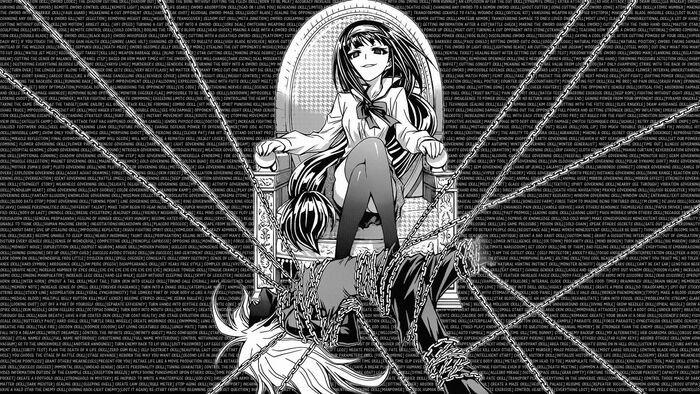 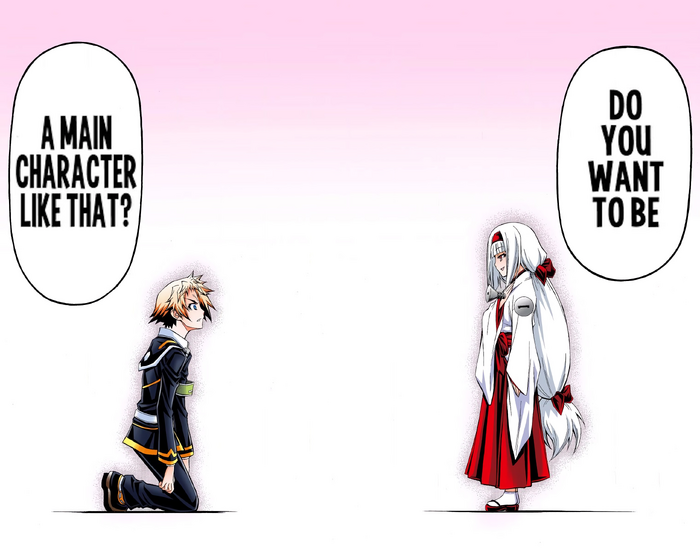 Najimi Ajimu (安心院 なじみ, Ajimu Najimi) is the founder of Hakoniwa Academy and the creator of the Flask Plan. Her partner is Hanten Shiranui. The leader of the Not Equals, Ajimu has been absent for three years after being sealed by Misogi Kumagawa. After Medaka Kurokami's success in reforming Kumagawa, the seal has weakened, whereupon Ajimu is set loose. Ajimu is the chief antagonist of the Kurokami Medaka's Successor Arc.

Name: Najimi Ajimu, The Not Equal Who Is Just Impartial, Anshin'in

Superhuman Physical Characteristics (Even while being sealed by the combination of Kumagawa's Book Maker and All Fiction, Ajimu kept great strength), Fourth Wall breaking, Self-Sustenance (Type 1 & 2; Being born before the Universe and lived in the void during Million of years, Ajimu can continue to act forever without rest or need for sleep), Immortality (Type 1; via Dead Lock), Martial Arts (With Four Figure Leg Lock), Sense Manipulation (With Mirror Juvenile), Limited Nigh-Omnipresence (With Alibi Block), Power Bestowal and Power Absorption (With Lip Service), Power Nullification (With Life Zero), BFR, Time Travel and Dimensional Travel (with Door To Door), Air Manipulation (Ajimu says that she has a skill to control oxygen molecules), Law Manipulation (Ajimu set up a rule for the Hero's Sword, making it so that only a hero can pull it out), Sleep Manipulation (Instantly made Zenkichi unconscious with an unknown skill), Weapon Creation (with Sword Looks), Possibly Memory Manipulation, Power Nullification, Statistics Reduction, Durability Negation, Non-Physical Interaction and Sealing (With Bookmaker), Possibly Disease Manipulation (With Five Focus), Possibly Perception Manipulation (With Parasite Seeing), Possibly Causality Manipulation (with Hundred Gauntlets), Resistance to Perception Manipulation (with Standing Ovation), Sealing (Partially resisted the effects of Bookmaker, escaped from Momo Momozono's sealing in a week), Power Erasure (Skills capable of erasing powers, such as All Fiction and Wrong Conversion, don't work on Minuses) and Causality Manipulation (Partially resisted the effects of All Fiction, although the skill was still an important part in sealing Ajimu).

All previous abilities massively enhanced; also all abilities previously rated "possibly" are a certainty, in addition to, Accelerated Development (Ajimu in her quest to find an impossible task gained an extremely large number of powers), Creation (Ajimu has created 700 million humans across the world that can act as her proxys), Limited Nigh-Omniscience and Precognition (Ajimu is stated to be Omniscient and possesses all knowledges, as past as Future events, but she decides to restrain her knowledge at the human level to be "fair" to the story), Surface Scaling (With Give Up-Down), Limited Information Manipulation (with Count up), Self-Power Nullification (With Unskilled)

Attack Potency: Unknown, at least City Block level (As she's sealed by Bookmaker, her physical strength should at least be at Misogi Kumagawa's level, if not higher due to the seal weakening) | Unknown, likely Universe level (Capable of damaging a perfectly-matched duplicate of herself), possibly far higher (Stated to be able to "become god" and "control infinity", among many other abilities, however the veracity of these claims is unknown)

Durability: Unknown, at least City Block level | Unknown, likely Universe level (She was able to observe the creation of the universe but we do not know how close she was to the blast)

Stamina: Unknown, possibly Infinite (Ajimu is born before existence itself and lived in the void Million of years, she doesn't need to sleep and eat)

Range: Varies from Standard melee range to Universal and Intedimensional with abilities (Some of Ajimu's skills like Five Focus can only be used within melee range, but some such as Alibi Block let her appear anywhere, including metaphysical places)

Intelligence: Nigh-Omniscience (While Ajimu is capable of true Omniscience, she usually refuses to use it, letting her get taken off guard)

Superhuman Physiology: Even being sealed by the combination of Kumagawa's Book Maker and All Fiction, Ajimu seems to have great strength. She has crushed the ground by just stepping on it. Ajimu has also carried a soccer goal all the way to the top of the clock tower using only one hand. Ajimu is shown to be incredibly fast, to have dodged both the attacks of Zenkichi and Emukae simultaneously without effort while doing a sideways peace sign.

Others: If you want to read all of her abilities click here.

Note: Due to the uncertainty regarding Ajimu's tiering, the nature of her abilities, and her portrayal within canon, she should not be used in versus threads. 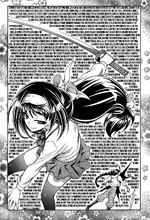 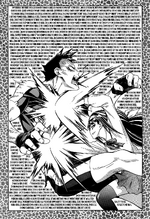 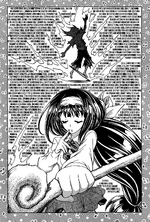 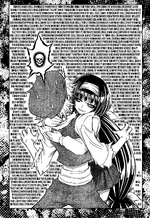 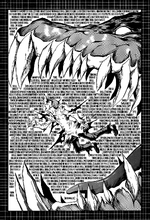 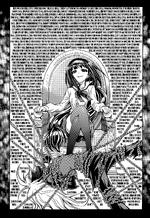 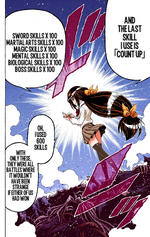 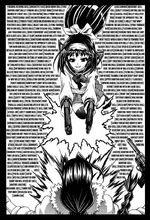 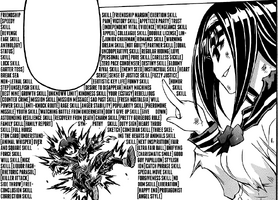