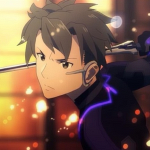 aka "Gag anyone else, and I'll murder you."

NOTE: I apologize for such a notion, but when all concept of media get in my way w/ something older than friggen creation of the Beyond-Outerversal Creation, I have all the right in all worlds to snap.

Wonderful World (Verse), and its contents.

ARCANA HEART (Abandoned unless anyone cares for a good catfight...)

CHAOS CODE (verse) (With a Sequel in the works, why did someone delete this page!?)

BOUND (A Game requested by my sister to play, with a graceful Dancer on a quest to destroy a truly powerful monster. Pcychological Elements ensue...)

LUDESIA: Spidering with Scrapping (Canned for not gathering enough info for the verse. Maybe someone else can pick it up someday...)

EYE OF JUDGMENT: LEGENDS: (With the ISO now working, I'll be working on this verse, Albeit slowly...)

Wonderful World Facts not realized, but are still regardless, true...

List of resistances the Wonderful World Verse has on record

Retrieved from "https://vsbattles.fandom.com/wiki/User:BMHKain?oldid=6211429"
Community content is available under CC-BY-SA unless otherwise noted.