VS Battles Wiki
Register
Don't have an account?
Sign In
Advertisement
in: Tier 9, Tier 9-B, Unknown Tier,
and 41 more 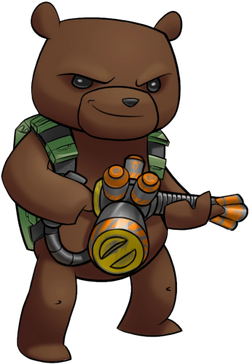 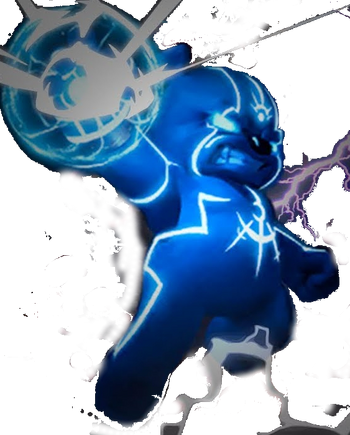 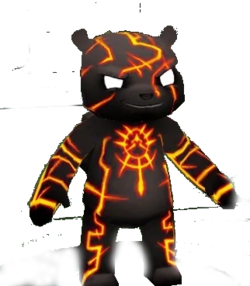 Oliver is a former janitor working under the Battle Bears, an army of bear-themed cyborg space pirates traveling through space to find treasures valuable enough to pay off the debt they owe to the ones who sold them their ship, the Ursa Major. During their travels, the Battle Bears have located a planet only known as the Huggable Planet, but before they could land on it, Huggables floating in space near the planet have breached the Ursa Major in an uncoordinated invasion, with their hugs being able to break all the bones in their body with a disease called Boneitis (despite the Battle Bears having no bones to speak of). Oliver, along with his brother Riggs (while also leaving Wil, his cousin, behind to act the hero), traverse the Ursa Major and shoot down any Huggables they find, setting up their adventures on Huggable Planet later down the line.

Superhuman Physical Characteristics, Inorganic Physiology, Healing, Weapon Mastery (Is skilled in using various weapons such as rifles and katanas), Cosmic Awareness (As are the Huggables, Oliver is aware that he is a fictional character), Explosion Manipulation (via the Bearzooka, which fires exploding Huggable arms and the Screen Clear, which does massive damage to everything in the same room as Oliver), Light Manipulation (via the Laser, which is a beam of light), Fire Manipulation (via the Flamethrower), Radiation Manipulation (via the Microwave), Death Manipulation & Transmutation (via the Slingshot, which fires Jackalope droppings that cause the opponent to turn black, inflate and explode if they consume it. It also causes the greenery of the area around it to quickly decay), Danmaku and Energy Projection (via the Spread/Dreadshot, which constantly fires a wave of energy projectiles in many directions), Power Mimicry (The Satellite fires the same projectile as the weapon Oliver is currently using), Absorption (via the Pot O' Gold, which can suck the blood out of the enemy and into the pot), Paralysis Inducement (Oliver can swear so hard it causes his opponents to be stunned for a insignificant amount of time, this is further amplified with the Swearaphone), Forcefield Creation and Invulnerability (via the Shield, which nullifies all damage taken for 9-11 seconds), Statistics Amplification (via Coffee, which gives a speed boost to him), Weapon Creation (By picking up three cartridges of ammo for his weapons, Oliver can upgrade them into their hyper forms, much stronger versions of the original weapons) and Resistance to Disease Manipulation (Even individuals with no bones can still be affected with Boneitis, as Battle Bears are stated to not be organic in any way[1]. Boneitis' effects are instant, and Oliver was being hugged by several Huggables at the same time and was no worse for wear afterwards)

As before, plus passive Invulnerability (Oliver takes no damage from any attacks while Overclocked), Time Manipulation (Can warp the flow of time and slow the speed of everything around him except for himself with Power 2), Shockwave Creation (via Power 3, which destroys all rockets and debris around him with a shockwave)

As before, minus abilities granted when Overclocked. Water Manipulation (via the Soaker and the Urine Trouble), Heat Manipulation (via the Steamshot, which fires a blast of steam so intense it melts the enemy's face off), Status Effect Inducement (via the Sake Bomb, which reverses the opponent's controls if it hits them), Reality Warping and Radiation Manipulation (via the Solar Wind Scar, which brings a field filled with nebulae and radiation into existence when it hits an enemy or a solid surface) and possibly a Resistance to Death Manipulation (Can eat the Imperial Basket Grande, which causes the consumer to die if eaten on an empty stomach)

Attack Potency: Wall Level (Wields the Microwave, which blasted a section of a wall clean off) | Unknown, likely Large Building Level (Casually one-shot the Spaceboss, who could destroy the entire Ursa Major with one missile. The Ursa Major is consistently shown to be at least this large. The HIP confirmed that the Overclock system is currently incomplete, and that by the time O.C.O. realizes its true potential, they will be too late to stop him) | Wall Level, likely far higher with the Solar Wind Scar (The Solar Wind Scar is visually identical to the sword Wil used to cut the sun in half, and the description of the Solar Wind Scar implies it is the same blade that did this)

Lifting Strength: Class K (Can wrestle with the Bearzerker in concept art, who weighs 985 tons)

Stamina: Very high (Fought against waves upon waves of Huggables for at least over a day without any sign of tiring in Battle Bears Zombies)

Range: Varies from extended melee range to hundreds of meters

Standard Equipment: Assault Rifle, a supercharged microwave, his backpack and a pile of sandbags | None | A Salt Rifle, B.E.A.R. Club and the Bearzooka

Intelligence: Genius (Despite receiving no combat training due to being a janitor, he is capable of expertly wielding his guns and mastered the way of the katana in the span of a few seconds. He is capable of quickly creating makeshift weapons and strategies mid-combat, such as the Flamethrower which is a can filled with coffee and Huggable dust used as ammunition to simulate actual flames, crafting the Kumakuri with a loose pipe, quickly figuring out that he can use Huggable limbs as a substitute for Bearzooka shells and even weaponizing his own swears to fight against the Huggables, among several other on-the-spot weapons and tactics he creates in the midst of battle. Read and memorized an entire dictionary filled with swears)

Note: Oliver doesn't share a key with his Battle Bears Gold appearance because BBG is canonically a simulation. This is shown with the Solar Wind Scar's existence (as it was initially a video game weapon) and the Tutorial, which shows a digital Oliver traversing through the digital world that makes up BBG.