VS Battles Wiki
Register
Don't have an account?
Sign In
Advertisement
in: Tier 2, Tier 2-B, Characters,
and 45 more 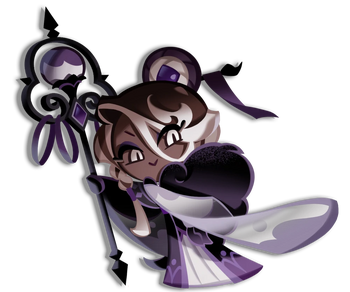 Dark Enchantress Cookie is a Legendary-class Cookie and the overarching antagonist of Cookie Run: OvenBreak and Cookie Run: Kingdom. She was created several years ago during The Night of the Witches, making her the only Cookie with a confirmed birthday. She is the embodiment of Darkness and the natural rival of Millennial Tree Cookie. After White Lily Cookie fell into the Ultimate Dough, she was cooked alive by the Witches and was transformed into Dark Enchantress Cookie. Her motive is to cause the Eternal Night with her Black Magic in order to get revenge on the Witches, who created Cookiekind solely to eat them.

"It is said every thousand years all witches from near and far come together for the Night of the Witches. And on that very night, Dark Enchantress Cookie was born. A dose of concentrated dark magic and poisonous scarlet pomegranate syrup gives this Cookie a deliciously evil taste. Since the moment of its creation, Dark Enchantress Cookie was filled with sweet ambition, she brought chaos to the Night of the Witches gathering and escaped, taking with it the secrecies of the witches. But now, after so many years, a dark shadow has emerged, could it be...her?"

"A solitary beam of moonlight shines in twilight. Like a pale lily, touched by the softest drops of rain, a Cookie silently enters the world. Her serene eyes reveal a curious nature eager for knowledge. Wielder of the mysterious Lily Staff, White Lily Cookie has proven to be a trusty friend and ally during the grim Dark Flour War. Victory was achieved, but alas, a dazed White Lily Cookie awoke amongst a field of flowers with no memory of the past. A longing for Pure Vanilla Cookie lingers on as a figment of the past, a memory within reach yet so elusive. Though a white lily's fragility invokes sympathy, do not forget that there is an intoxicating aroma hidden behind her pure, serene beauty."

Superhuman Physical Characteristics, Immortality (Types 1, 3, 4 and 8), Magic, Flight, Acrobatics, Reality Warping, Darkness Manipulation (Is the embodiment of darkness) Energy Manipulation and Plasma Manipulation (Via Plasma Crystal Ball. Can create dark spheres), Explosion Manipulation (Via Melon Dynamite), Homing Attack (Via Carrot Missile), Corruption, Black Hole Physiology (The Everburning Dark Crystal, an ingredient required to make her Magic Candy, engulfs everything around it, with even light being unable to escape), Soul Manipulation, Void Manipulation, Sealing, Power Absorption, Mind Manipulation and Law Manipulation (Black Magic and Dark Moon Magic users are capable of doing this. The principles of Nature are a complex of laws that keep the world in perfect equilibrium and allow it to exist. Trapped Pure Vanilla Cookie's soul inside of the deepest, darkest void), thought-based Time Manipulation (Casted a spell over the entire Vanilla Castle and everyone in it that trapped them in a time loop), Resistance Negation (Rainbow Bear Jellies are stated to be immune to magnetic effects and are unaffected by them from nearly every Cookie, but Dark Enchantress Cookie is one of few Cookies able to ignore their immunity and make them magnetic anyways), passive Morality Manipulation (via Darkwind Quiver, it feeds on the morale of everything nearby), Dream Manipulation (via Haunted Snuggly Bear, which can eat nightmares), Data Manipulation and Transmutation (Coin Magic turns enemies and obstacles into coins. New PepBook can passively transform obstacles and Jellies into computer data), Precognition (Has a superior version of precognition to Timekeeper Cookie's. The Eternal Eye of Darkness can see the ends of the strands of fate), Power Bestowal (Can grant others the power to resurrect), minor Durability Negation (Terrible Truth does a fixed amount of damage), passive Damage Transferal (The Red Velvet Dragon, a being created solely out of her magic, has this), Portal Creation, Illusion Creation (Stated by Priestess Cookie B to be able to do this. The White Lily Cookie that had been traveling with GingerBrave was one of her illusions), Magic, Summoning (Can summon Cake Witches and the Cookies of Darkness. All Cookies can use Cookie Cutters to forcefully summon other Cookies for assistance), Transformation (Can transform herself into White Lily Cookie), BFR (When defeated, she BFRs herself through a portal and can come back from this portal at any time), Regeneration (Low-Godly, possibly Mid-Godly. Just like the other Legendary Cookies, Dark Enchantress Cookie is merely an avatar of the concept of chaos and darkness, and can create a new body at any time), Status Effect Inducement (Stunning, interrupting attacks, etc), Existence Erasure (When her Cake Witches successfully grab an enemy or obstacle, the target becomes enveloped in darkness and is erased from existence), Possession (Possessed the Eerie Anglerfish and spoke to Lobster Cookie through it), Creation (Created Matcha Cookie), Power Nullification (Nullified Pure Vanilla Cookie's forcefield with Soul-Piercing Gaze), Teleportation, Immortality (Types 1 and 4), Resistance to Bone Manipulation (Cookies don't have bones), Sealing (Easily broke out of a Moonstone, which passively seals the one inside. Moonlight Cookie was unable to break out of a Moonstone without assistance), Disease Manipulation (Scaling from Tiger Lily Cookie, who can harm Jellywalkers with physical attacks. Cookies are mutated into Jellywalkers on contact with them, becoming a "jelly-eyed mindless monster" in the process), Extreme Cold and Cosmic Radiations (Can exist in space without any problems)

As before, minus Darkness Manipulation, Corruption, Morality Manipulation, Soul Manipulation, Dream Manipulation, Precognition, Teleportation, Status Effect Inducement, Durability Negation, Summoning, Existence Erasure and Possession (while still retaining abilities granted by being a Black Magic user). Transformation (Can transform into Dark Enchantress Cookie), Passive Fate Manipulation (The Divine Guardian Shield brings victory to those with a righteous cause) and Plant Manipulation (via her skill)

Attack Potency: Multiverse level (She has surpassed the Witches in power, who are at this level. Fought Dark Enchantress Cookie alongside the other members of The Five as White Lily Cookie) | Multiverse level (Far stronger than before. Caused the Eternal Night, which would've destroyed the entire cosmology and remade it in her image, and presumably defeated everyone who stood in her path)

Speed: Massively FTL+ (Could keep up with GingerBrave and his team, as well as The Five)

Standard Equipment: She always has her Candy Cane Staff of Darkness on hand. She also usually has her Pet, Eternal Eye of Darkness, around to create strong laser beams that have the same physiology as Cake Witches as Dark Enchantress Cookie. As White Lily Cookie, she always has her Lily Staff on hand, which lets her cast magic along with housing her Soul Jam.

Intelligence: Genius (Devised a plan to start the Eternal Night in a short amount of time, while accounting for naturally unpredictable characters like Timekeeper Cookie. Is capable of corrupting Sea Fairy Cookie, Wind Archer Cookie, Fire Spirit Cookie and Moonlight Cookie, who all know about her corruption powers. Retains all of her knowledge as White Lily Cookie, who was the top of her class at the Blueberry Yogurt Academy)

Weaknesses: Dark Moon Magic requires the highest price to be paid in return for its power (such as when White Lily Cookie was sealed inside of a Moonstone for using it). As White Lily Cookie, The Soul Jam on her White Lily Staff is tied to her power and life source. If it is stolen or destroyed, she will become immensely weaker, to the point of being unable to attack or move | None notable

Dangerous Question: Dark Enchantress Cookie creates several spheres made of darkness and hurls them at the enemy, stunning them for a few seconds in a large radius and effectively stopping the effects of their attacks.

Ravenous Slicer: A Cake Witch will slash the enemies with their trident, dealing a great amount of damage while also creating several explosions, stunning the enemy. This move was enough to one-shot The Five.

Soul-Piercing Gaze: The Cake Witch and/or the Eternal Eye of Darkness fires a beam of dark energy at the target. This attack will push the target back rapidly if they are not erased. This attack also has the capability to nullify barriers.

Terrible Truth / Magic Circle: Dark Enchantress Cookie creates her own Magic Circle around the enemies, dealing a fixed amount of damage and immobilizing them while they are under the effects of this attack.

Note: When used in VS debates, the OP must clarify which form Dark Enchantress Cookie / White Lily Cookie starts out in while using the first key.

Mario (Mario Bros) Mario's Profile (Pure Hearts Mario and Dark Enchantress Cookie were used, speed was equalized, both had prior knowledge, winning was via incapacitation and Mario was bloodlusted and had all optional equipment)

Son Goku (Xeno) (Dragon Ball Heroes) Xeno Goku's Profile (Dark Enchantress Cookie was used and had all of her Pets and Continuum Cog's Conceptual Manipulation was restricted, Goku did not have the Keysword and winning was via incapacitation, death or BFR)