VS Battles Wiki
Register
Don't have an account?
Sign In
Advertisement
in: Tier 7, Tier High 7-A, Characters,
and 16 more 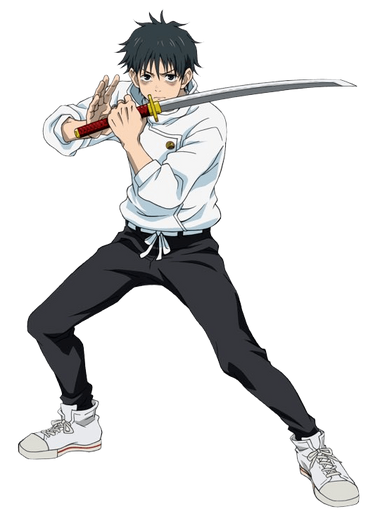 Yuta is currently a second-year student at Jujutsu High who is studying overseas. He was the main protagonist of Jujutsu Kaisen prequel series Tokyo Metropolitan Curse Technical School.

Six years ago, Rika gave Yuta an engagement ring, and they promised to tie the knot when they grow up. Unfortunately, Rika was killed in a street accident. Not accepting his lover's untimely demise, Yuta unconsciously cursed Rika, trapping her soul in the living world, making her a Special Grade Cursed Spirit that always stood by Yuta's side.

Powers and Abilities: Superhuman Physical Characteristics, Non-Physical Interaction (Can interact with curses who are abstract manifestations born out of people's thoughts, mind and negative emotions), Accelerated Development (Sorcerers are stated to improve when there are consequences to suffer, also stated that a person can change thanks to the slightest of events), Skilled Hand-to-Hand Combatant, Weapon Mastery (Proficient user of swords), Enhanced Senses (Sorcerers can see cursed spirits that are invisible to the human eye), Energy Manipulation, Curse Manipulation, Statistics Amplification (Sorcerers can amplify their physical power by flowing cursed energy through their bodies via negative emotions), Corruption (Can corrupt human souls), Power Mimicry (Can unconditionally copy Cursed Techniques), Death Manipulation, Paralysis Inducement (Through Cursed Words Yuta can kill or paralyze his targets), Healing (Can heal people using Reverse Cursed Technique)

Lifting Strength: At least Class 5 (Physically superior to Megumi Fushiguro, who could hold approximately 2.4 Tons inside his own Domain)[5]

Stamina: Superhuman (Took a beating from Geto and was able to continue fighting,[1] possesses more Cursed Energy than Satoru Gojo)[4]

Range: Extended Melee range with his Katana, Tens of meters with Cursed words